The public broadcaster’s plan was to initially let go of 600 employees to save R700 million, however, that number was reduced to 400.

Staffers at SABC joined by the labour desk of the EFF picket outside the Public Broadcaster, 16 November 2020. They are calling for an intensified strike which would result in a total blackout. The staff are against the privatisation on the SABC as well as restructuring and retrenchments. Photo: Tracy Lee Stark

BUSINESS NEWS - On the back of the dark cloud that has been 2020 came news that SABC employees would have to face retrenchments as a measure to mitigate the financial ills of the flailing public broadcaster.

Following a bailout from National Treasury earlier this year, the SABC  announced a “new model” in an effort to revamp itself and rehabilitate its image.

Among the plans outlined in the model was an effort to save an estimated R700 million by slashing its large wage bill.

Speaking to The Citizen, SABC group chief executive officer (CEO) Madoda Mxakwe revealed that the SABC’s current cost of employee compensation stood at a total of 43% of the overall expenditure – a figure which he labelled “unsustainable”.

The SABC’s plan was to initially let go of 600 employees, however, after what Mxakwe called “meaningful engagements with various stakeholders”, that number was reduced to 400.

“Even out of that 400 impacted people we already have in the current structure, vacancies have always been available, about 170… So, if the impacted colleagues have the required qualifications, the required skills and experience, they will be able to be absorbed.”

Mxakwe was also mindful that the SABC may not even be able to reach their target of saving R700 million through this exercise.

As a result, the SABC would implement a freeze on salary increases across the board over the next three years. This was in addition to a reduction in the available number of annual leave days and sick leave days afforded to each employee, as well as a moratorium on the opportunity to “cash in” on leave days not taken by employees. 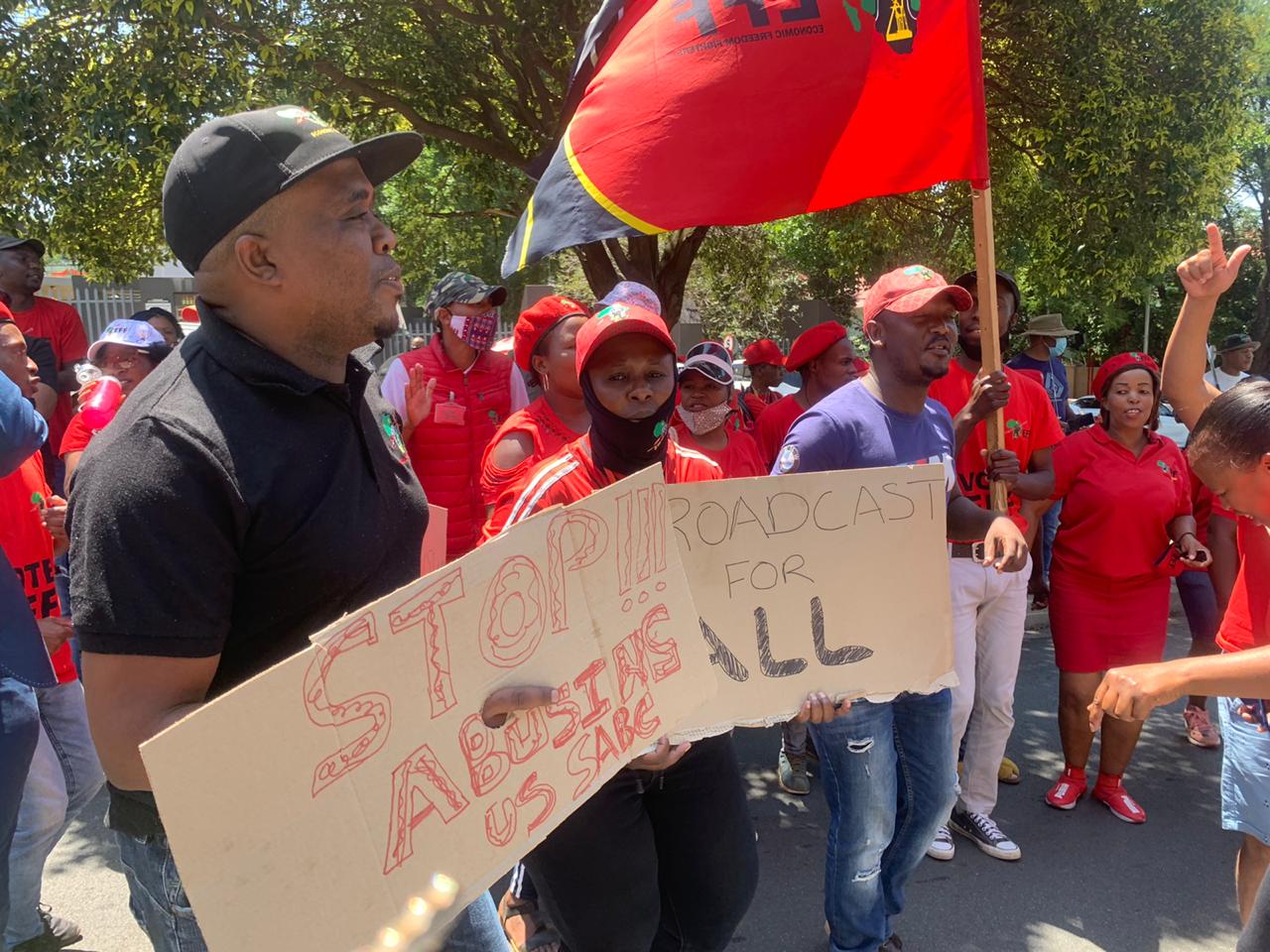 16 November 2020 – The EFF labour desk showed up at the SABC in Auckland Park to support staff who are protesting against pending retrenchments.
Photo: Tracy Lee Stark

Mxakwe explained that there had already been a significant cut in redundant staff at management level after it was found that some managers did not even have subordinates.

“Where we have had to look into is the next layer at a general management level. You had general managers that did not have anyone reporting to them and we had to really remove the layers. We are left now with two layers from a management point of view. It helps the organisation in terms of agility, decision making as well as implementation and execution.”

This came against the backdrop of an SABC that was also greatly affected by the Covid-19 pandemic.

“It has been a particularly difficult time for the SABC from a revenue generation point of view. We are an organisation whose revenue streams, 85% of which, are generated from selling our time, both radio and television as well as digital to the industry,” begins Mxakwe.

“With the constrained economic environment, a lot of the clients and our partners were hit hard and had reduced their budgets when it comes to advertising, so that impacted us.

Mxakwe further explained that the need to inform and create awareness in different communities became very focused during this period.

He estimated the financial impact of the pandemic on the SABC’s reduction in revenue to be about R1.5 billion – R1.8 billion.

When asked if the plan to continue with retrenchments was a sign that the SABC’s previous cost-cutting and revenue generation plans had not worked, Mxakwe said: “No, actually. We have seen that there has been a significant increase from a revenue point of view. We have also explored, from a partnership point of view, the deal we have signed with Telkom.” 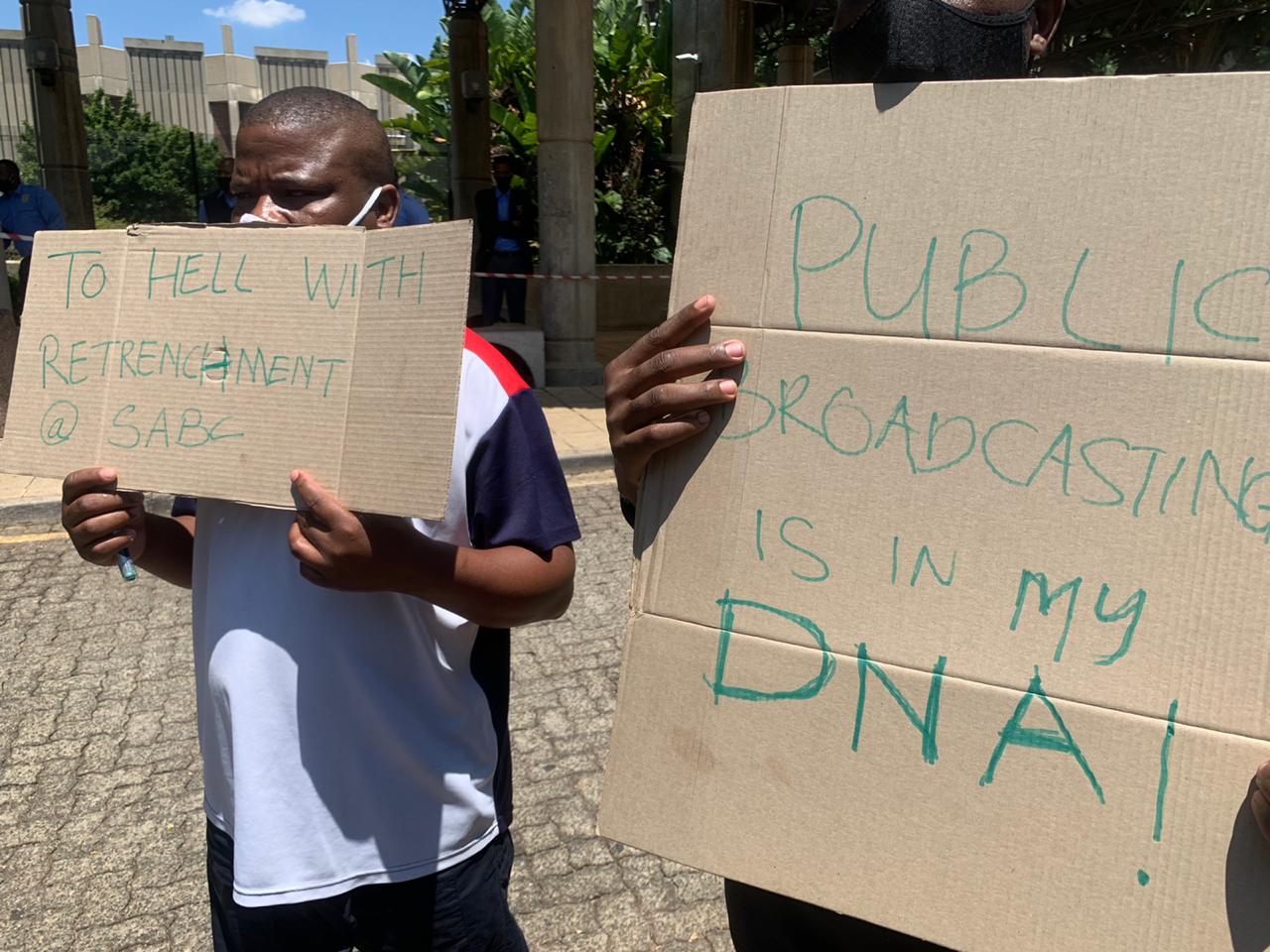 This is in reference to their deal to license certain channels to major players in the over-the-top (OTT) space to accelerate their digital strategy.

“At the heart of that is to recognise that various audiences are consuming content differently and on different OTT platforms and the SABC also needs to be there. And we do this without compromising our universal access obligations.”

Mxakwe assured that all the aforementioned changes had been planned in such a way that the SABC’s content output would not be affected.

Additionally, Mxakwe said that the SABC had – to his knowledge – paid all outstanding debts with production houses who had previously claimed to be awaiting payment from the public broadcaster.