People took notice when the Asset Forfeiture Unit attached a plane, helicopter, car and properties to the value of R106 million last week.

BUSINESS NEWS - To most of the country Coin-it Trading was simply another in a long list of get-rich-quick schemes which results in a laugh from those who think they’re too smart to fall for these kind of scams.

But for many people, especially those in KwaZulu-Natal, who invested their inheritances, retrenchment packages, borrowed money, or savings in Coin-it Trading to an estimated R4 billion, the company’s collapse is no laughing matter.

They have lost everything in the scheme run by Malcolm de Beer and his family from a huge warehouse in the industrial area at 10 Conte Street, Dundee.

De Beer, who was the sole shareholder, was placed under provisional liquidation on 28 February 2020.

Malcolm De Beer who was the sole shareholder of Coin-It Trading, was placed under provisional liquidation on 28 February 2020. 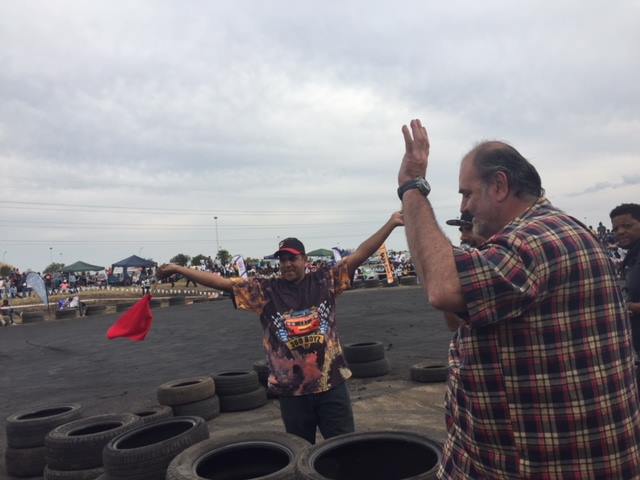 Malcolm de Beer at one of the events Coin-it sponsored. Image: Facebook

Coin-it enticed people into becoming members and paying a deposit and monthly instalments towards buying a truck, bus or earthmoving equipment that would be leased out, with the rentals paid to the “buyer” for a certain time.

The “owners” would get paid a sum for a certain number of months until the vehicle is “paid off” and then they would get a double payment monthly.

Some of the estimated 3,000 investors received a monthly payment or two as promised, but then the money dried up. Those who asked questions were ostracised.

The sad truth was that Coin-it bought and leased nothing. The money was simply churned in a classic Ponzi scheme, while only De Beer and his family got rich, with him managing the scheme and dealing with the money as his own. 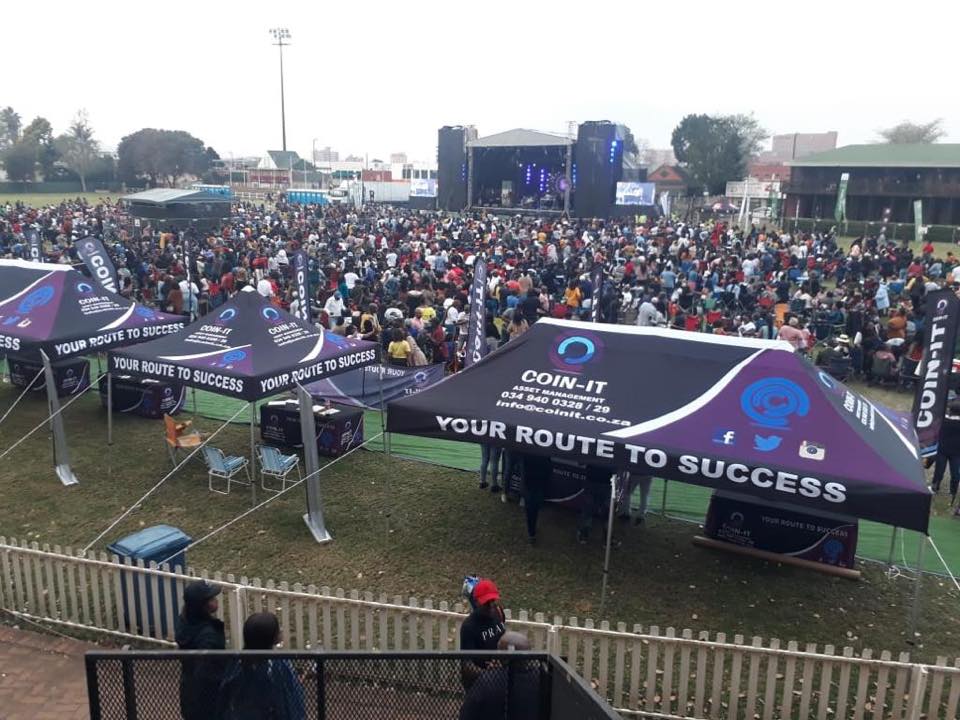 One of the Coin-it marketing events.

According to some of the investors, at least three people committed suicide when they did not get their money back.

The majority borrowed money to join when they saw their friends and family getting paid after a month. Now they have lost their cars and their homes, leading to a general sense of despair around the town of Dundee.

From the company’s Facebook posts, it is evident the De Beers put a lot into marketing Coin-it Trading.

They sponsored a tent at the Comrades marathon, sponsored various athletes, hosted a jazz concert and events where drivers spin their cars as far afield as Swaziland and even “gave back” to the community by making up parcels for poor children. Van with Coin-it branding. Image: FacebookBut they also took a lot more from the communities of KwaZulu-Natal. According to a list on a Facebook group seeking justice for the investors, one family paid almost R3 million into the scheme.  The minimum “investment” was R110,000.

Patricia de Beer also used God to encourage people to “invest”, often quoting Bible verses. She posted handwritten letters signed by her husband to investors promising to “keep working for us” and referring to Nelson Mandela. 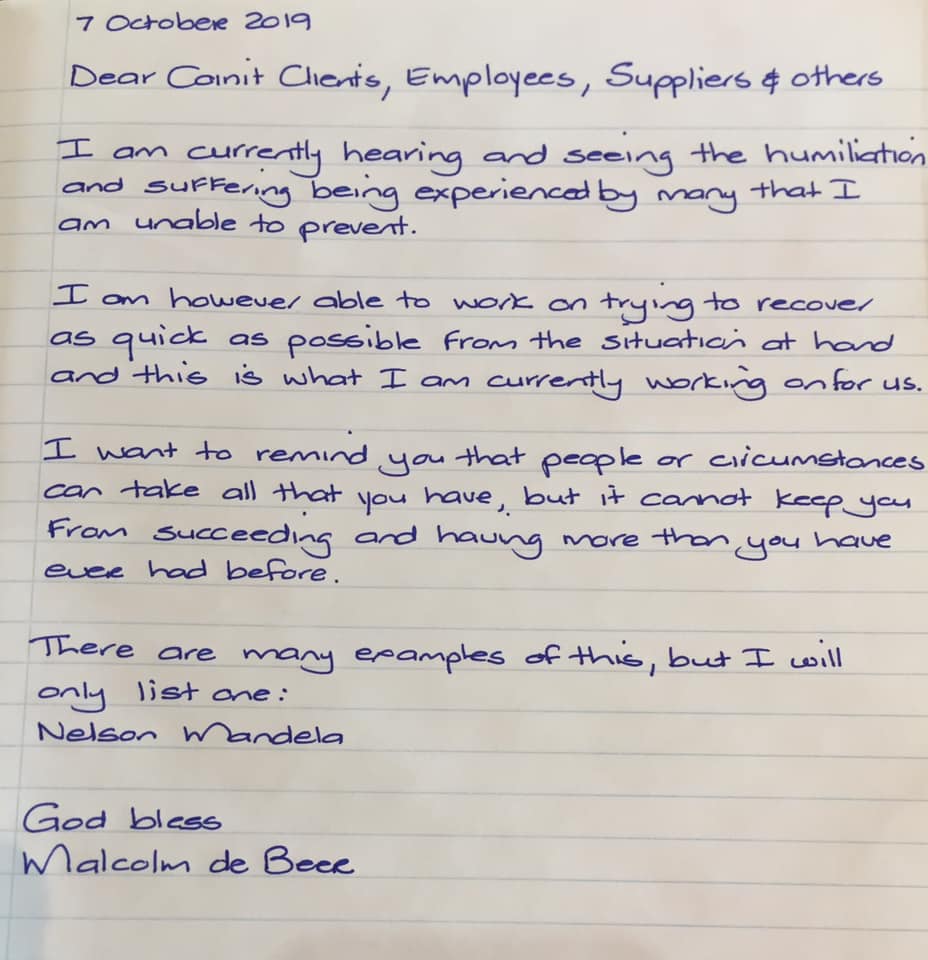 The FSCA smells a rat

The Financial Services Conduct Authority (FSCA) smelled a rat in August 2019 when it heard about Coin-it offering “investment packages” to the public that appeared to offer unrealistic returns which raised suspicions of possible financial sector law violations.

The FSCA then conducted a search and seizure operation at the business premises of Coin-it and Commex Minerals, as well as the private home of one of the former directors of Coin-it and opened a case with the Hawks for further investigation.

Coin-it was finally wound up on 28 May 2020 and the Asset Forfeiture Unit obtained an attachment order for 11 properties, five aircraft and a car in November last year. 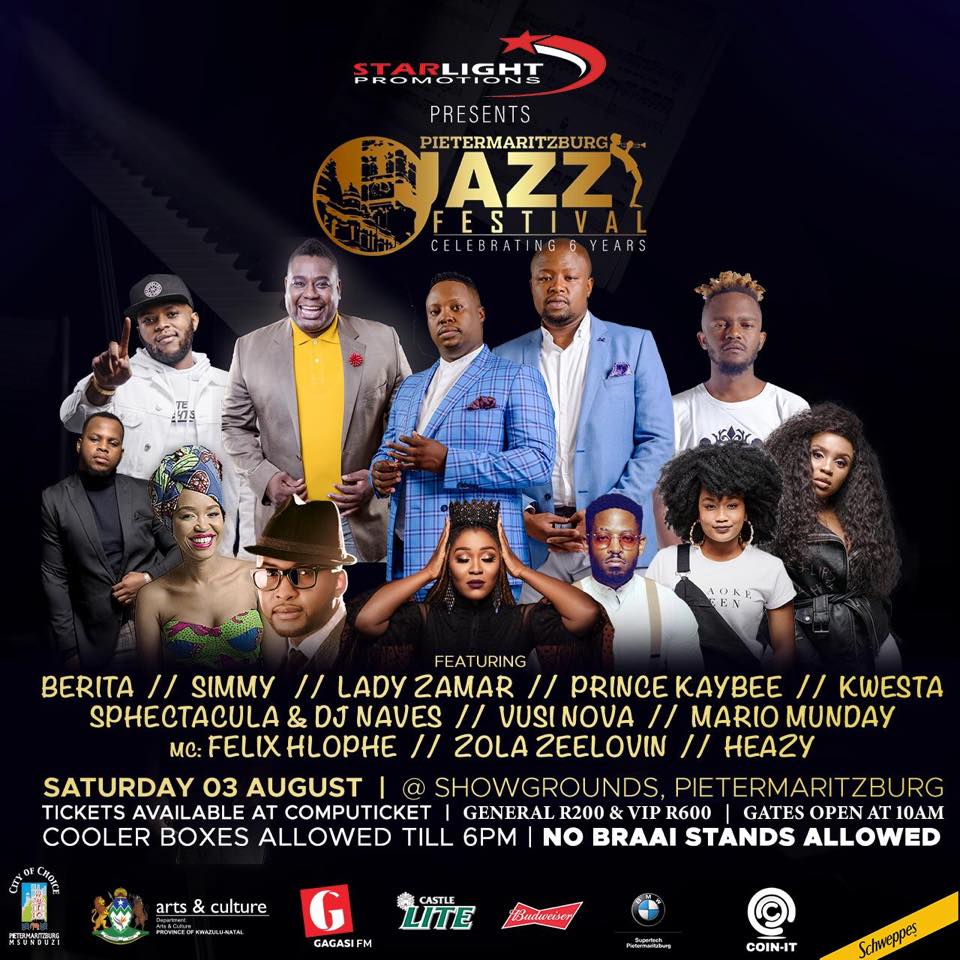 But De Beer had a plan

Although the company was wound up, De Beer allegedly tried one last time to con his “investors” by sending them a letter that all the club documents had been returned.

According to the letter, signed by “Management”, Coin-it had “been inundated with reports from members of the club and plights relating to a variety of challenges they face that include the following e.g. sickness, deaths, food challenges only to name a few (sic)”.

The letter then says payments could not be made because the liquidators took the documents.

“After lengthily discussions as management, we have decided to provide members with a form of temporary assistance. Based on the above we have decided to offer each member an interim allowance of R1,000.00 (one thousand rand only) while pending court cases are on-going.

“The club management has decided to pay this amount for a period of 6 months, thereafter we will revise based on the situation. This will slowly reduce the amount which the club undertook to pay to you. This amount is small however we understand that it will make a difference to most members of the club.”

Who is Malcolm de Beer?

There is very little information available about De Beer, but his wife, Patricia, was featured often in local media, social media and on radio shows marketing the scheme and attending events.