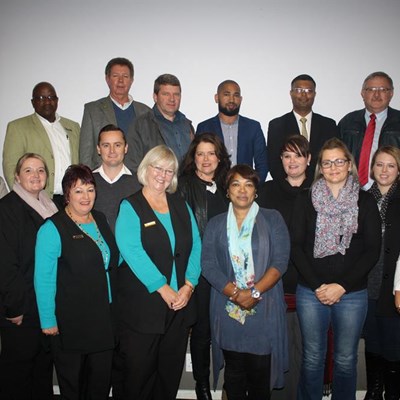 The George Business Chamber executive committee for 2017/2018 are, back from left: Richard Shumi, Dennis Farrell, Henry Grobler (treasurer), Ewayne Le Roux, Fuad Choonara and Dr Willie Cilliers (chairman). Front: André du Plessis, Berneace Nel, Ingrid Cronje, Bertus Conradie, Michelle Hingle, Brenda Vorster (vice-chairlady), Michelle Cawood-van Vuuren, Irene Koegelenberg, Mary-Anne Loose, Corne Nunns and Nadia Abrahamse.
GEORGE BUSINESS NEWS - George managed to surpass the 3,3% average growth rate of the Western Cape economy by expanding on average by 4,2% between 2004 and 2015.
This is according to Dr Willie Cilliers who was elected as chairman of the George Business Chamber for his third consecutive term at the annual general meeting of the Chamber on Friday.
Delivering his annual report, Cilliers said George contributed 40,8% (R16,341-bn) to the GDP of Eden in 2015, more than twice that of Mossel Bay that was second with a contribution of 17,2% (R4,86-bn).
George furthermore makes a favourable contribution to the employment market by providing 36,7% of jobs in Eden, with its unemployment rate of 20,7% also below the national figure of 26,6%. The unemployed youth in George make up 29,1% of the market, compared with 54% nationally.
The award-winning Chamber, run as a formal non-profit company since last year, had the biggest turnover of all chambers in the province, playing a huge role in the growth of the city. "From these statistics, it is clear that it also has a very important role in the growth and sustainability of the Eden region," he said.
Cilliers stressed that the Chamber should constantly be evaluating its value offering to provide in its members' needs, both in the formal and informal sectors, with specific focus on the empowerment of young people and women. In this regard, the Chamber aims to continually seek fresh opportunities to train and develop new entrepreneurs to be ready for the market place.
During the year, 125 entrepreneurs were trained. Some of them are now operating successful businesses. George Municipality and Trias SA, an entrepreneurs' programme funded by the Belgian government, sponsored the training.
"The partnership between the George Business Chamber and George Municipality is surely an example of what should happen in South Africa. The creation of a business-friendly climate is extremely important for business to be able to grow and attract new investors to George. Work can only be created if the economy grows." he said.
The George Business Chamber was the top Chamber of the Afrikaanse Handelsinstituut in 2016 for the second time in three years.
Click here for a previous article: George averages higher growth that Western Cape