Rising revenue and profits despite continuing headwinds from the fallout of the "dieselgate" emissions cheating scandal helped make for smiles at Volkswagen.

But profit margins were squeezed as the group with its 12 brands struggled with new EU emissions tests - introduced following its "dieselgate" emissions cheating scandal broke in 2015 - and massive investments in the switch to electric.

The costs did not put bosses off doubling down on their battery-powered ambitions, saying they now plan 70 new electric models by 2028 rather than 50 and lifting sales targets by seven million, to 22 million vehicles by the same date.

Flagship VW fell below the 4.0 percent floor executives had striven to hold.

In response, and to afford the 44 billion euros of investments planned by 2023, "we will have to make progress on efficiency and performance in all areas," chief executive Herbert Diess said. 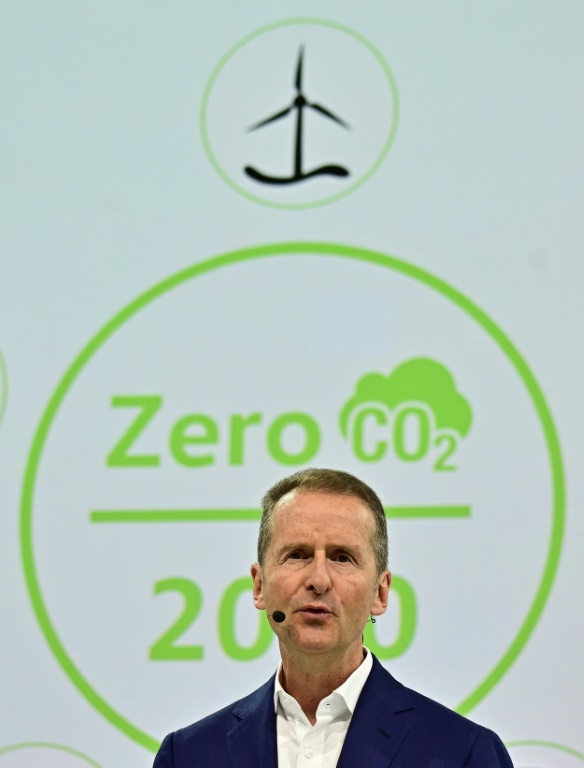 December saw the group announce a three-billion-euro savings drive for its own-brand division on top of an existing restructuring, which is set to cost some 21,000 jobs worldwide.

Such plans are backed by major shareholders the Porsche-Piech clan, although the powerful head of the group's works council Bernd Osterloh has warned in recent days against reported plans to slash a further five to seven thousand posts.

"We will need to make job cuts, and achieving this purely through fluctuation and partial retirement will be difficult," Diess said Tuesday.

Quirks in VW's governance structure mean worker representatives in Germany can make life especially tough for executives who fail to secure their blessing.

But bosses' eyes are turned towards competition from abroad, with Tesla in the United States and a slew of Chinese newcomers seeking to achieve an unassailable lead in electric vehicles, while Google and other tech giants have stolen a march in automated driving.

While VW has big plans for the future, 2018 saw the group notch up 3.2 billion euros in special items to cover costs relating to the "dieselgate" scandal that broke in 2015, when the firm admitted to manipulating millions of vehicles worldwide to appear less polluting.

The amount was the same as in 2017, with a sizeable chunk of the costs falling in Germany as VW paid a group-wide fine of 1.0 billion euros, while high-end subsidiary Audi had to forfeit 800 million euros.

Since 2015, legal costs, fines, buybacks, and refits to affected cars have cost VW 29 billion euros, the group said - with most of the cash flowing to the United States.

In Germany alone, massive cases have been launched by both shareholders and owners of manipulated cars - the latter group numbering more than 410,000.

Looking to the year ahead, VW said "continuously challenging market conditions" would weigh on performance.

A slowdown in major market China could see growth in car sales grind to a halt in 2019, with a similar situation expected in the US market.

And unpredictable risks including the possibility of a chaotic British departure from the European Union and potential US import taxes on European cars could yet hurt carmakers.

Nevertheless, VW aims for "slightly" higher unit sales this year than in 2018, with revenues "as much as 5.0 percent" higher and an operating profit margin of between 6.5 and 7.5 percent - up from 5.9 percent last year.