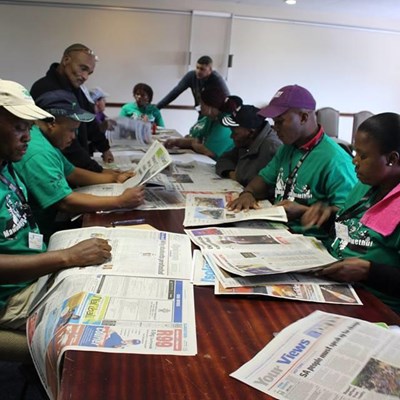 Participants doing research in newspapers during a session at the three-day workshop.
GEORGE NEWS - The Southern Cape Land Committee (SCLC) hosted its 4th annual Farm and Forestry Workers Platform in Wilderness from 29 April to 1 May.
Coinciding with Workers' Day, the purpose of the platform was to bring together workers in the farm, forestry and state land sectors to connect with each other, build solidarity and learning, and develop strategies for advancing their struggle.
"The key focus of this workshop was on building capacities for movement building by workers themselves in order to collectively struggle for justice in their lives and working conditions," said Roger Domingo, SCLC director.
The keynote speaker, Ronald Wesso from Oxfam South Africa and a veteran activist and researcher in the fields of workers' struggles and movement building, focused on movement building from below as opposed to relying on centralised, bureaucratic modes of organisation. Wesso said that crucial to grassroots movement building is that local groups must retain their ability to decide for themselves. Workers could also embrace alternative politics and they could learn from traditions such as feminism, direct democracy and anarchism.
The weekend was organised around the issues of labour, land and tenure, and women workers. In terms of labour, participants heard about other practical experiences of movement building, such as of the Joint Peace Forum which successfully built an anti-drug and violence community movement in Bonteheuwel in Cape Town.
Participants also worked in groups to actively develop movement building practice by identifying allies and enemies, interpreting farm-related news, and developing a role-play of mobilizing practice.
According to Domingo, a key issue of contention emerging from the weekend was the role of the Extension of Security of Tenure Act (ESTA) in relation to evictions from farms.
"Watching a short film about a recent 'legal' eviction of farm dwellers in the Wellington area and how such evictions undermine so many constitutional rights of the evicted, was an emotional experience for many of the farm and forestry workers, such as the forest dwellers of Community Wilderness Heights, who were able to bring their own local struggles of land occupation and threats of eviction into further context.
"Participants at the platform shared their frustrations with the ESTA which, although it was supposed to protect the tenure rights of farm dwellers and workers, in practice works more in favour of farm owners and simply provides them with legal protection to undertake evictions."
One of the many highlights of the platform was the exploration of gender inequality and the role of women in struggles and organisation. Through creative exercises and collective engagement, participants, especially men, were challenged to think about whether women are currently occupying equal positions in communities and in struggles.
Overall, the general agreement was that NGOs such as SCLC can lend crucial support to workers in their struggles, but struggles and movement building have to be advanced locally, by workers themselves.
'We bring you the latest George, Garden Route news'