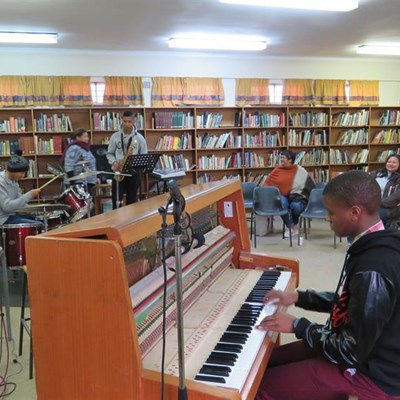 The George High Jazz band has only been in existence for a short while, but their level of proficiency elicited a compliment from Ramon Alexander. The boys were thrilled to be tutored by professionals.
GEORGE NEWS - A group of jazz musicians who have been setting the Cape on fire with their hot sounds was in George for a performance on Saturday 17 June at the Oakhurst Insurance George Arts Theatre.
The Ramon Alexander quartet, including the jazz legend Lionel Beukes, also held a workshop which was attended by young George jazz musicians who benefited from having an entire morning during which the subtleties and intricacies of jazz was demonstrated to them.
By the end of the morning all participants were buoyed up by the experience of sharing their love of music.
The Ramon Alexander Jazz ensemble consists of Ramon Alexander (composer, pianist and arranger); Annemie Nel (drummer); Lionel Beukes (bassist) and Byron Abrahams (saxophonist). This weekend they treated jazz lovers with an extraordinary repertoire and also some original works by Ramon Alexander.
Lynette Petersen, extraordinary local vocalist and music teacher at Outeniqua High, joined the group as vocalist.
Petersen thanked the George Music Society for their generosity in hosting the events.
Both Lynette Petersen and Ramon Alexander attended schools in George. Another music prodigy from George, the young saxophonist Kerwin Albertus from Outeniqua High, also attended the workshop and performed at the evening performance. Alexander complimented participants like the George High Jazz band and Sugar and Spice for the level of professionalism they demonstrated. "It did not sound that good when I set out - you guys are impressive!"
Alexander hopes to return in December for another performance and plans to present another workshop for those who missed this opportunity.
The local jazz band Sugar and Spice (at the piano), consisting of Rico Muller (piano,) Cecily Pepler (singer), and Jumario Thyse (bassist) have been playing at venues in Hoekwil and Wilderness and is a smooth-sounding group. They are jamming with Byron Abrahams (right), demonstrating how to sound bold and engaging on the saxophone, and drummer Annemie Nel.
ARTICLE & PHOTOS: PAULINE LOURENS, GEORGE HERALD JOURNALIST
'We bring you the latest George, Garden Route news'