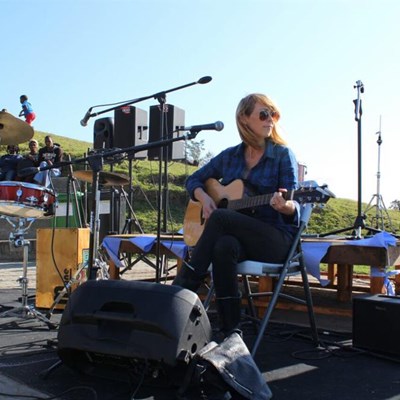 Heather Waters in action at the Mdumbi Green Fair Music Festival.
GEORGE NEWS - Distinguished local artist Heather Waters has just returned from a tour of the Wild Coast where she performed at the Mdumbi Green Fair Music Festival.
Waters and guitar virtuoso Ben Badenhorst, the only acts hailing from the Garden Route, shared the stage with music greats such as Akkedis, Alimho and Storm, Kathy Raven, and the popular Rubber Duc.
Mdumbi Green Fair Music Festival is an initiative of Transcape NPO, an organisation initiated by Mdumbi Backpackers' workforce and friends. Together with the medical staff at Canzibe Hospital they established a non-profit organisation to help the communities of the Nyandeni sub-district tackle their significant health, social, educational and economic needs.
The festival was started as a fun and creative way to not only raise funds for Transcape NPO, but also to create income opportunities for their local community members, promote the Xhosa culture and plant 300 trees for the betterment of the planet.
One of the most popular attractions at the festival, Heather Waters had the crowd enthralled with her catchy tunes and soulful lyrics. As a prominent fighter for human rights, Waters has gone above and beyond the call of duty in assisting with this initiative.
According to festival organiser, Hyman van Zyl, Heather Waters and crew were essential in the success of the Mdumbi Green Fair Music Festival, because she "believes in the concept of using art and music to stimulate community development and income generation for previously disadvantaged communities, and went out of her way to help".
Waters has also offered to work with some of the local performers in an attempt to improve their acts to the point where they could be invited to events in other areas of South Africa.
'We bring you the latest George, Garden Route news'