When a monster awakes - in Afrikaans 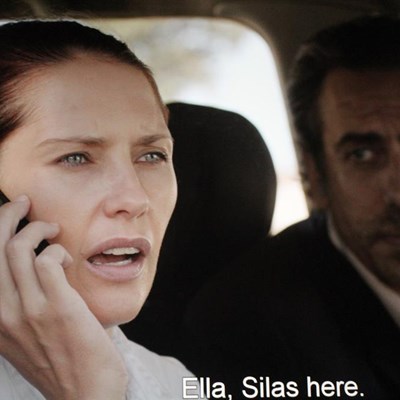 Ella Nesser (Juanita de Villiers) is the attractive, but inexperienced murder detective in charge of the case. Photo: Michelle Pienaar
SOUTHERN CAPE NEWS - When movie director Johnny Breedt decided he wanted to tackle an Afrikaans film, he wanted to make something different.
"I've worked on many films in the last 25 years. I never thought I would direct a film like this," he said. Die Ontwaking was screened as the opening film for the Eden Independent Film Festival at Ster Kinekor two weeks ago.
The movie is a psychological thriller based on the first book of a trilogy, Abel se ontwaking (Abel's awakening), by author Chris Karsten. The acclaimed South African actor Gys de Villiers plays the leading role of Abel, the owner of a small gallery specialising in African masks and art.
He is also the collector of tattoos, which he harvests from female victims who happen to cross his path. Ella Nesser (Juanita de Villiers) is the attractive but inexperienced murder detective in charge of the case. Veteran actor Paul Eilers also plays a leading role in the film.
From its introduction, the viewer is fully aware of the serial killer's identity. Breedt explains that the story is much more Ella's story than it is Abel's. "It is about following Ella on her journey," said Breedt. He holds the film rights to the first three books. When asked how the actors dealt with the dark content, Breedt replied that he had that conversation with Gys de Villiers. "He told me: 'Broer, ek was gesuip vir 30-jaar. I've been in darker places in my life."
Breedt explained that most of the actors were first time actors. "They were really great," he said. "It was a tough film to make; we did it in 18 days." The film was produced on a budget of R4,2-million and was shot in different locations in Cape Town and Stellenbosch. "It was difficult to raise the money," he said. "When you tell people it's not a romantic comedy, it is full of people who die and swear, the typical response is: In Afrikaans? Ek dink nie so nie."
The film was completed in April last year, but they decided to wait with the release. "We gave it breathing space," said producer Vlokkie Gordon. "It's an organic process. It's very important who you release a film with."
Die Ontwaking walked away with the prize for Best Feature Film at the first Indie Karoo Film Festival held in Prince Albert earlier this year. It will be released next year in February. Breedt's next film will be based on Ettienne van Heerden's book Toorberg.
(Die joernalis het haar storie in Engels geskryf omdat die vraag- en antwoordsessie met Breedt net in Engels was. Die film het Engelse onderskrifte, so is toeganklik vir alle plaaslike gehore.)
ARTICLE AND PHOTO: MICHELLE PIENAAR, GEORGE HERALD - JOURNALIST
'We bring you the latest George, Garden Route news'