The coffin of Run-DMC's Jam Master Jay, the rapper born Jason Mizell, is carried out of a Queens Cathedral after his funeral on November 5, 2002.

On Monday, prosecutors announced the 10-count indictment against the alleged suspects Ronald Washington - who is already in federal custody - and Karl Jordan Jr, who was arrested Sunday.

The charges are linked to the events of October 30, 2002, when the pioneering rap music star Jason "Jay" Mizell was fatally shot in the head at his studio in Queens. The artist was 37 years old and a father of three.

Jordan Jr, 36, pleaded not guilty to all counts Monday in a teleconferenced arraignment. Washington, 56, will be arraigned at a later date.

If convicted, each defendant faces 20 years to life in prison, or the death penalty.

"They walked in and they murdered him in cold blood," said Acting United States Attorney Seth DuCharme in announcing the charges.

"For the crime of murder, the passage of time offers you no escape."

According to court documents, the motive was linked to Mizell's acquisition of cocaine that was intended for distribution in Maryland by a group including Washington and Jordan.

An internal dispute resulted in Mizell cutting Washington out of the deal, which according to prosecutors led to the murder plot.

The killing was particularly shocking given the reputation of Run-DMC, a 1980s-era hip hop group known for hits including "It's Tricky" and "Christmas In Hollis." The trio regularly railed against violent gang culture, which in the early 1990s became associated with rap music.

Over the years, investigators had explored a number of possible motives - including that the fatal shooting involved a grudge against fellow Queens-born rapper 50 Cent, who was Jam Master Jay's protege. That theory was later dropped.

Jam Master Jay's murder followed a string of executions of rappers in the 1990s, including the notorious shootings of superstars Tupac Shakur and The Notorious B.I.G. 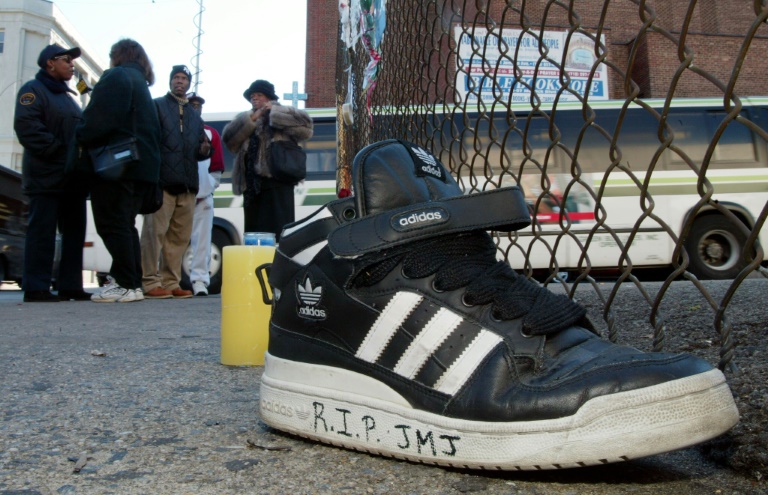 An Adidas sneaker bearing a mourner's message sits on the street outside the music studio in Queens where former Run-DMC member Jason Mizell, known as DJ Jam Master Jay, was shot dead.

They also established a new, enduring rap aesthetic incorporating street culture, a departure from the flashy, disco-inflected attire of the group's predecessors.

Their single "My Adidas" off their hit album "Raising Hell" led to a massive endorsement deal with athletic brand Adidas, kicking off today's inextricable link between hip hop culture and sneakers.

And the "Walk This Way" remake off the same album propelled rap into the mainstream, with Run-DMC and Aerosmith performing a groundbreaking rap-rock version of the latter's 1970s hit.

All heralding from the Hollis neighborhood of Queens, Run-DMC included its DJ - Jam Master Jay - and the MCs who dropped rhymes, Joseph "Run" Simmons and Darryl McDaniels, or "DMC."

Prior to his death, Mizell became particularly influential in New York as a local cultivator of talent, working with young aspiring rappers and founding a DJ Academy.