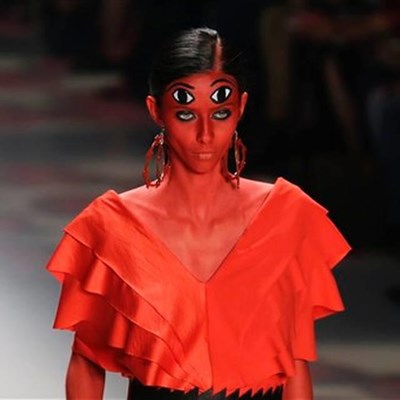 It's not every day the black cape-clad "Star Wars" villain struts his stuff on the runway, flanked by two stormtroopers packing serious firepower.

The "Star Wars"-themed fall-winter 2015 collection at Triton was the ostensible reason behind Vader's catwalk cameo, with models sporting black hooded Obi-Wan Kenobi capes over their mini dresses and leggings fitted with lozenge-shaped appliques that evoked an urban take on a stormtrooper's plastic armor.

Despite the "Star Wars" star power at Triton, the most applauded collection of the day, clothes-wise, was Iodice's tribal chic, floppy little dresses that quivered with fringe and swam in graphic prints. The Santa Fe sophisticate look at Sacada was another winner, with its pastel hued cocoon coats covered in geometric, vaguely Native American designs.