ENTERTAINMENT NEWS - The curtain came down on Paris men's fashion Sunday with two high-concept shows that had walk-on roles for Solange and K-pop sensation Lisa.

Kenzo's design duo Carol Lim and Humberto Leon said goodbye to the French label with Solange as the surprise performer in the same Paris stadium which Elton John had packed to the rafters a few nights previously.

The Californians' ended their eight-year reign with a bang as the American star appeared on a platform to sing "I'm a Witness" in between the men's and womenswear lines.

The brilliantly choreographed event had started with a similar wow moment when a huge curtain was pulled away in front of 600 or so fashionistas to reveal several thousand more people on the other side.

Having conducted her 11-piece black-clad brass band, Beyonce's younger sister then walked arm-in-arm with the designers to acknowledge the ovation at the end, with the feminist English rapper M.I.A in the front row.

Balmain's Olivier Rousteing got the weekend rocking late on Friday night by making the hot French DJ Kiddy Smile the centre of his show-cum-concert. 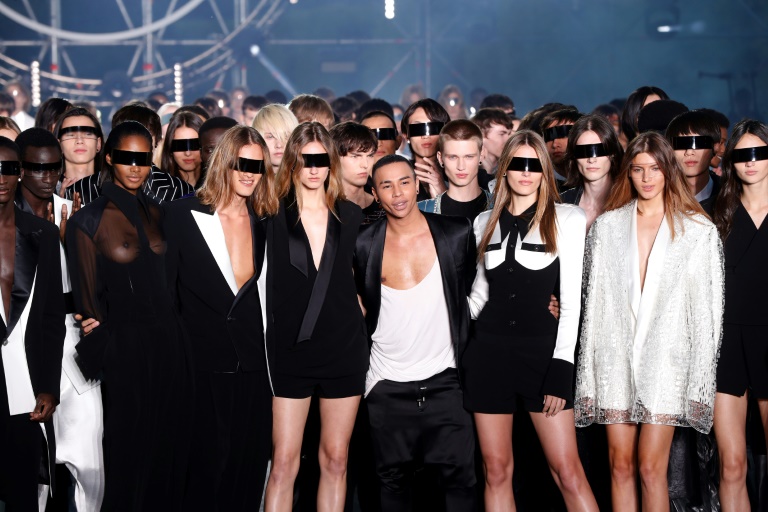 The young French creator - who often dresses big music stars for their tours - also threw open the doors by giving away 2,000 tickets.

"Everyone is talking about inclusivity from behind their screens but no one is actually doing something," he told reporters. 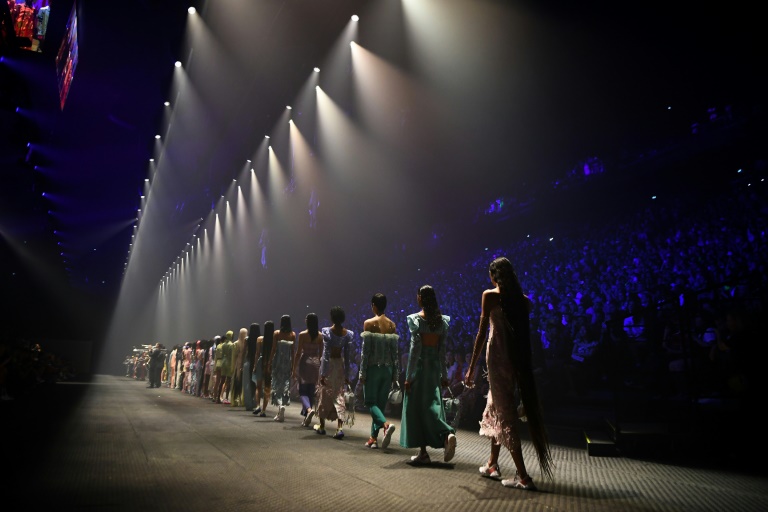 Inclusion has been one of Lim and Leon's watchwords, and their final Kenzo collection was inspired by Japanese Ama divers, the "sea women" who have been diving for pearls for 2,000 years.

Traditionally, the divers only wore a loincloth and the pair picked up that motif with rippling, silkily aquatic clothes that weren't obviously sexy but were utterly sensual at the same time.

Men's and women's lines were peppering with gorgeously original fishing and mermaid metaphors, with a fluidity and a dreaminess about the clothes, particularly in the play with pearls, urchins and little touches of foaming silk and organza.

While Lim and Leon went out on a high, you could be forgiven for feeling that Hedi Slimane, Mr Rock Chic himself, the man who is habitually billed as a style superstar, was treading water.

The man credited with the skinny look has taken a terrible kicking from critics since unseating the beloved feminist creator Phoebe Philo at Celine.

He closed fashion week with another no-expense-spared show that began with a awesome theatrical device, which for some is where the creativity ended. 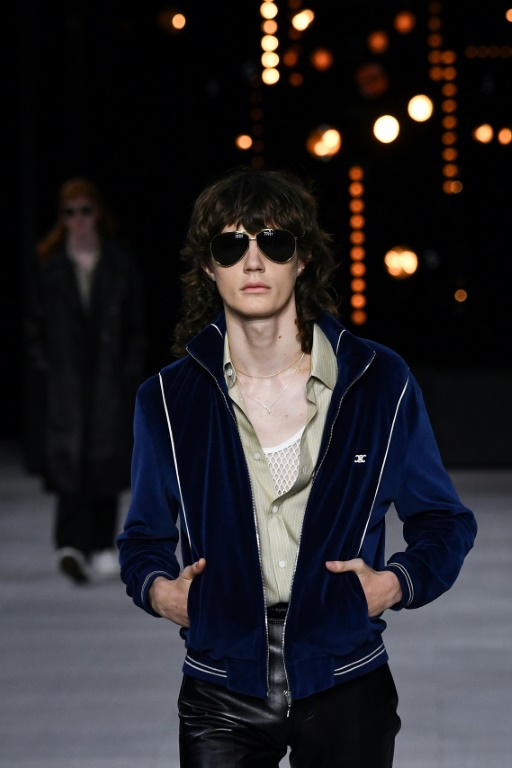 The big news is that the "Sultan of Slim" has jettisoned his trademark drainpipes, the trousers the late Karl Lagerfeld once lost nearly 42 kilos (92 pounds) to fit into, for flared faded jeans and leather trousers.

His "Celine 04" collection was very much like a male version of "Celine 03" - a walk down memory lane, and not all of those memories were good.

This time it was a sometimes literalist re-creation of what American West Coast rock star types were wearing circa 1973, with added sparkles. 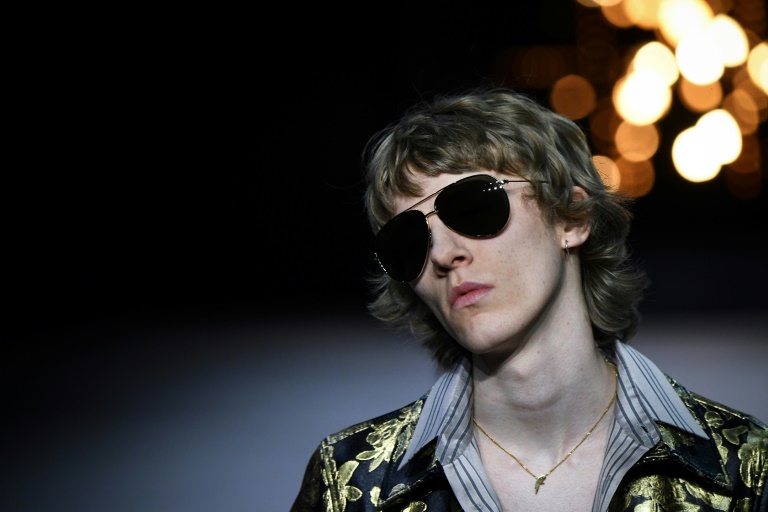 70s attitude: Hedi Slimane brought back the men's open-necked shirt and necklace at the Celine Paris fashion how.

If it wasn't for the couture finish, it was a look that you might be able to assemble from a well-stocked Los Angeles charity shop.

Some tops carried downbeat slogans from New York artist David Kramer's paintings such as "Yesterday was better", "My own worst enemy" and "Downhill from here".

You could not help but wonder if Slimane - whose loyal fans are known as "Slimaniacs" - was teasing his critics, with one of Kramer's images carrying the legend "...There is no irony here." 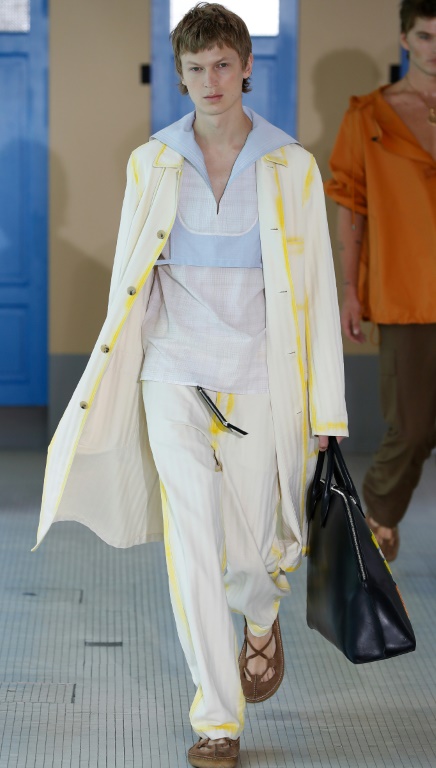 New kid on the block: Lanvin played with every cliche of the French summer and seaside and somehow made them look new.

Fans did scream at the end but it was more for Lisa, the Thai-born rapper who is Slimane's new "official muse" and who was in the front row.

There was much joy to be had elsewhere with the young French designer Bruno Sialelli confirming the promise of his debut collection for Lanvin with a show held at a swimming pool.

Quirky, cool, cute and a lot of fun to look at - and clearly to wear - Sialelli turned out a collection that played with every cliche of the French summer and seaside and somehow made them look new.

It was hard not to smile at his tricorne straw hats. 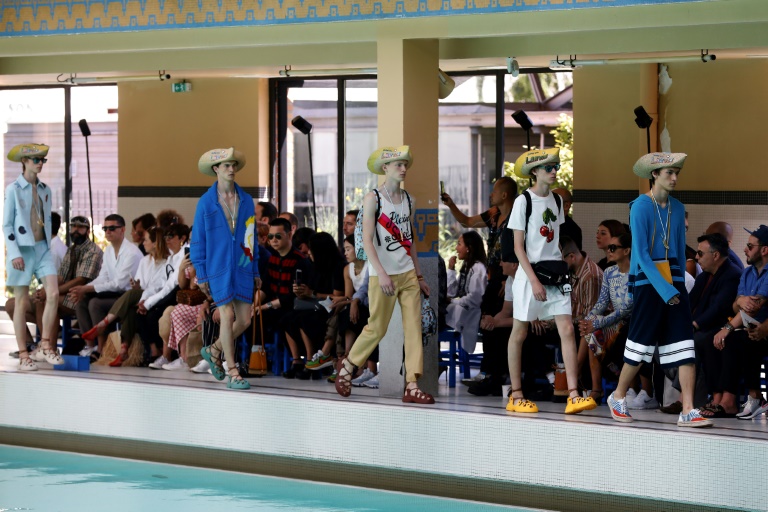 Not for him the pasty, androgynous models that dominate the Paris catwalk.

"I wanted the boys to eat well and to look healthy and strong," he told AFP.

"Now I need a holiday, he added. "I mean, I love my work but holidays are the best things in life, no?"