Sell out show a laugh a minute 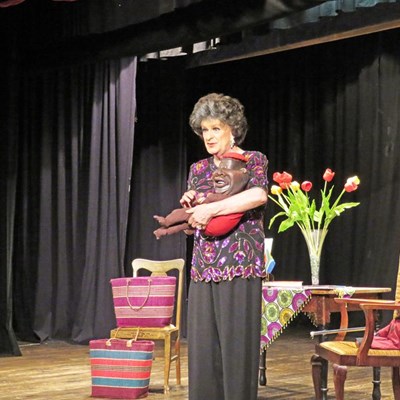 Both Pieter-Dirk Uys's shows titled "An Evening with Evita Bezuidenhout" on Sunday and Monday were sold out at the Oakhurst George Arts Theatre.
GEORGE NEWS - The larger than life show biz persona Evita Bezuidenhout was at her satirical best on Sunday at the Oakhurst Insurance George Arts Theatre.
As usual, dressed in a glamorous outfit, long nails and elegant hairstyle, she was engaging and up to date, bringing current events like last week's parliamentary fiasco into the show with hilarious effect.
Pieter-Dirk Uys's solo performance of 90-minutes, An Evening with Evita Bezuidenhout, covers events since the 1950s.
Tannie Evita said she was most impressed with the suave way in which our President Zuma presented himself to Queen Elizabeth during a state visit and at dinner, where Evita was also being hosted. But in a SMS to the Queen afterwards, she warned her to lock her bedroom (with Zuma and his wife sleeping in a bedroom just down the passage from the Queen) in Buckingham Palace.
After the show, a group of admirers had the chance to speak to Uys. He told the George Herald that he is still very active visiting schools to educate children about HIV/Aids. Since 2000 Pieter-Dirk Uys has been travelling around South Africa and has spoken to 1,5 million school children.
He also visits prisons and reformatories, with a free Aids awareness entertainment called For Facts Sake! He has also released a corporate Aids information video, Having Sex with Pieter-Dirk Uys, as well as the family friendly video, Survival Aids, and Just a Small Prick! about treatment and the fears surrounding testing for HIV. He is also involved in a school in the Darling area for underprivileged children.
Last year, Evita se Perron, Pieter-Dirk Uys's cabaret theatre and restaurant in Darling, celebrated its 20th anniversary. The venue is famous for its satirical garden, Boerassic Park, and is the domain of Evita Bezuidenhout, the 'most famous white woman in South Africa'. The unique museum/nauseum of apartheid artifacts reflect the madness of the past.
On the DSTV Travel Channel (also on Sunday) Tannie Evita promoted tourism in the Western Cape and in the Darling area. Both the shows in George were sold out.
ARTICLE & PHOTO: PAULINE LOURENS, GEORGE HERALD JOURNALIST
'We bring you the latest George, Garden Route news'