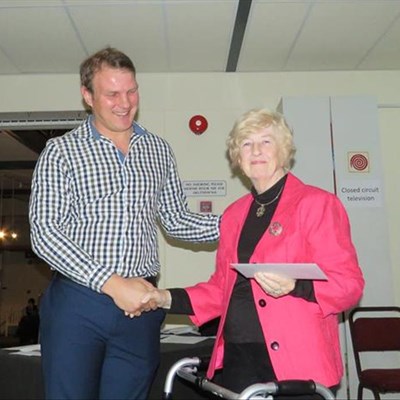 Nedbank sponsored a voucher for a four ball round of golf with golf carts at the Nedbank Private Wealth Fancourt golf day. It was presented by Wilhelm Koch (left) from Nedbank, as a merit prize to Maura St John (right) for her painting Only the Lonely. Maura is the chairman of Scava.

GEORGE NEWS - There was an air of expectation at the prize winning event of the fifth annual Visual Expressions art competition held at the George Museum on Wednesday 9 August.

Members of the South Cape Association of Visual Arts (Scava) annually raise R10 000 to fund the cash prize money for the regional art competition, which is open to all adult artists.

The George Museum hall was packed with art lovers and a number of the 66 artists who participated. More than 200 entries for the competition were exhibited for the month of August.

Each year the overall standard lifts with some imaginative art work coming to the fore from artists as far away as Plettenberg Bay, Great Brak, Sedgefield and Riversdal. So said the judges including Prof Daan Roestorf, retired Prof of Art Stellenbosch University and Spencer Hooper, a man who is well known in art and photographic fields of excellence.

WinnersThe winners in the five categories are: Landscape: Heather Klette with her painting Namibia; Portrait/Figure: Samantha Jordaan with her painting Spilling Out; Floral/Still life: Karin Combrink with Moonlight Serenade; Animals/Wildlife: Jaques de Bruyn with a painting titled And now for something completely different and Abstract/Experimental: Thomas Vermeulen with his painting Reflections on lake Bengazi. Vermeulen's fabric design also formed a striking feature of the exhibition. Nedbank sponsored a voucher for a four ball round of golf with golf carts at the Nedbank Private Wealth Fancourt golf day. Wilhelm Koch from Nedbank presented it as a merit prize by to Maura St John for her painting Only the Lonely. Lucky prizes were donated by PNA and The little Art Shop.

Susan Alexander and Karin Combrink (vice-chairman) were thanked for making some choice soups and creating an intimate ambiance with candles; Ian Tainton was thanked for putting in two days of hard work to hang the works and doing a superb job. Bella and Ken Smith as well as Bill Bennett were mentioned for being stalwarts on the committee. Art appreciator Tim Kirby hands the winner of the Floral/Still Life category Karin Combrink her cash prize. He praised this year's entries for the competition.