A keenly awaited statement from Queen Elizabeth II issued Tuesday was conciliatory towards her grandson and his mixed-race spouse after they had an interview with US chat show host Oprah Winfrey.

The royal family has responded to explosive racism claims from her Prince Harry and his wife Meghan.

ENTERTAINMENT NEWS - Britain's royal family has begun a fight back against explosive racism claims made by Prince Harry and his wife Meghan, indicating the couple's comments will not go unchallenged as the country divides into partisan camps.

A keenly awaited statement from Queen Elizabeth II issued Tuesday was conciliatory towards her grandson and his mixed-race spouse after they had an interview with US chat show host Oprah Winfrey.

But it also stressed that "some recollections may vary", as the Buckingham Palace vowed to look into the couple's assertion that an unidentified royal had asked how dark their unborn son Archie's skin would be.

The row is being watched worldwide, in the United States where the couple now live and across the multi-racial Commonwealth, which the queen heads, dragging Britain's most famous family further into a debate about racism and the country's colonial past.

The UK government is refusing to get involved in the family's biggest crisis since the very public collapse of the marriage of Harry's parents, other than to praise Elizabeth's stewardship of the country and the 54-nation Commonwealth.

But pointedly, Downing Street has declined to disown remarks by junior foreign minister Zac Goldsmith, who accused former army captain Harry of "blowing up his family".

"What Meghan wants, Meghan gets," added the Conservative politician, who is a close ally of Prime Minister Boris Johnson. 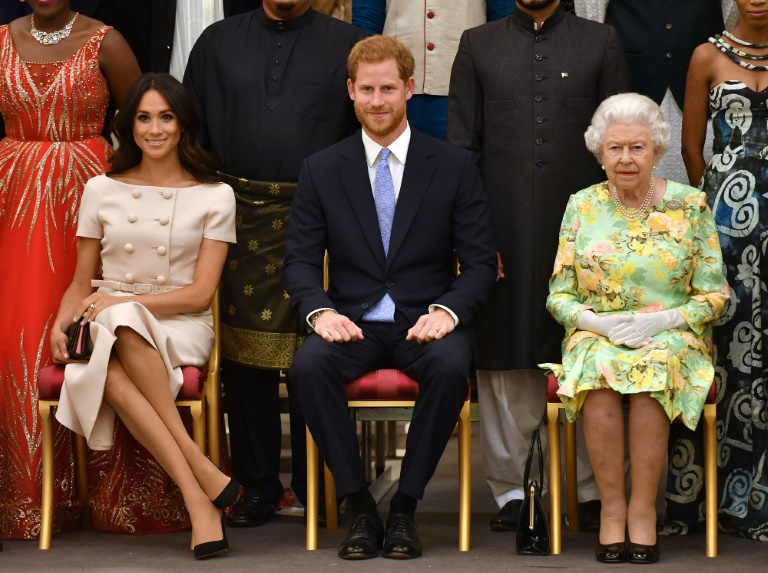 "Harry, Meghan and Archie will always be much loved family members," Queen Elizabeth stressed in her statement.

Senior minister Jacob Rees-Mogg denied there were any wider ramifications for the 94-year-old queen, who has reigned over Britain and 15 Commonwealth realms including Australia and Canada since 1952.

"She has done her duty. I think she is loved across her realms for that," Rees-Mogg said.

"And I don't think interviews with chat show hosts in the United States makes a great deal of difference to that."

However, former Australian prime minister Malcolm Turnbull said the allegations should pave the way towards his country holding another referendum on abolishing the monarchy.

"The bottom line is that in Australia the scandals, the personalities, the dramas of the royal family are not really the issue," the former head of the Australian Republic Movement told Britain's ITV, which aired the Winfrey interview on Monday to an audience of more than 11 million.

"The issue is that Australia's head of state should be an Australian citizen chosen by Australians, not the king or queen of the UK." 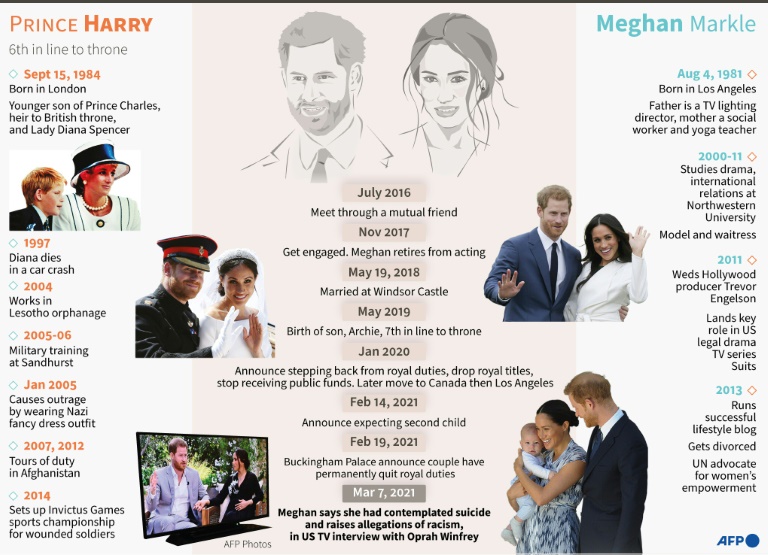 Profiles of Britain's Prince Harry and his wife, Meghan Markle.

US network CBS, which first broadcast Winfrey's interview on Sunday, said close to 50 million people had watched worldwide, and the figure would rise as more territories air it.

Winfrey said the racist remark did not come from either the queen or her 99-year-old husband Prince Philip, who is in hospital with a heart condition.

The queen's statement said the charge of racism was "concerning" and would be "taken very seriously", but added that it would be "addressed by the family privately".

"Harry, Meghan and Archie will always be much loved family members," Elizabeth stressed.

But The Daily Telegraph newspaper said that in noting that people's memories may diverge, the palace statement suggested that the person behind the remark about Archie's skin tone may already have been identified.

It said the public were unlikely to learn more, as this was "expected to be Her Majesty's final word on the matter". 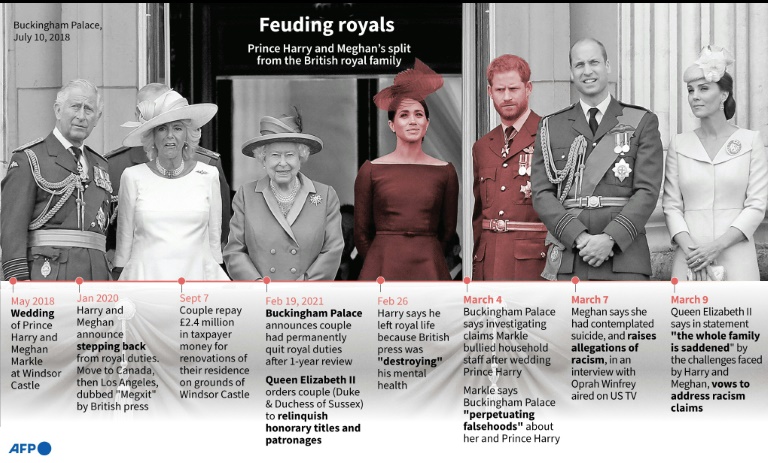 The Sun newspaper, however, said the queen was to investigate further through "private conversations" with senior royals including Harry's father Prince Charles, her oldest son and heir, and Harry's elder brother William.

'Too little, too late'

Former royal correspondent Peter Hunt said the 61-word statement was "the bare minimum", at a time when the royals find themselves in an "enormous hole".

Charles has yet to comment, but on Tuesday was filmed touring a Nigerian Christian church in London whose pastors are promoting a drive to vaccinate more black people against the coronavirus.

One of Meghan's complaints was that she had suicidal thoughts during her time in Britain, but received no support, provoking fresh debate about the royal family's ability to connect with ordinary people.

A YouGov poll of 4,656 people after the interview aired in Britain indicated almost a third (32 percent) felt the couple was unfairly treated, the same proportion as those who thought the opposite.

Opinions diverged on lines of party affiliation and age, mirroring the fissures that have opened up in Britain since its 2016 vote to leave the European Union.

Younger people and opposition Labour supporters were more favourable to Harry and Meghan. Older respondents and Conservatives took the royal family's side.