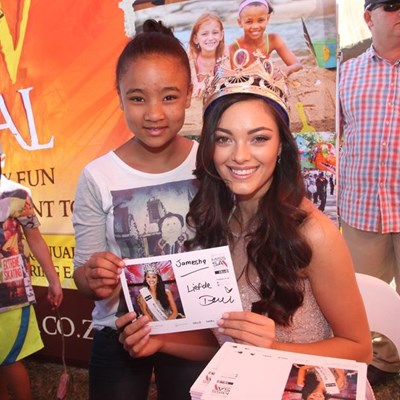 Miss SA, Demi-Leigh Nel-Peters during a signing session in Sedgefield. Photo: Myron Rabinowitz.
ENTERTAINMENT NEWS - Demi-Leigh Nel-Peters has revealed chilling details about how she desperately fought off one of her attackers to escape being taken on a joyride during an attempted hijacking.
The beauty queen was travelling along Jan Smuts Avenue near the Hyde Park Shopping Centre in Johannesburg on Wednesday evening when four armed men approached her car.

Demi-Leigh told TshisaLIVE that she saw the gunmen approaching and knew exactly what was about to happen.


“I saw them approaching me, three to my left and another on the other side, and I knew by their eyes what they were coming to do. I was petrified but prepared for what was coming,” she said.
Even though she had three guns pointed in her face Demi-Leigh went into defence mode and knew she had to get away somehow
“I had at least three guns pointed at me. I climbed out of the car but they told me to climb back in because I was coming with them,” she said.

Having completed a driver’s safety course Demi-Leigh instinctively punched one of her attackers in the throat.

“He was dazed and pushed me into the car. I forced my way out and ran as fast as I could into traffic to get help,” she added.

After knocking on about 30 or 40 car windows for help a young woman finally let her into her car and drove her to a safe place.

Demi-Leigh later returned to the scene to find her car and some of her belongings still there.

The incident has left her shaken but she is glad to have escaped unharmed.
Source: All4Women.