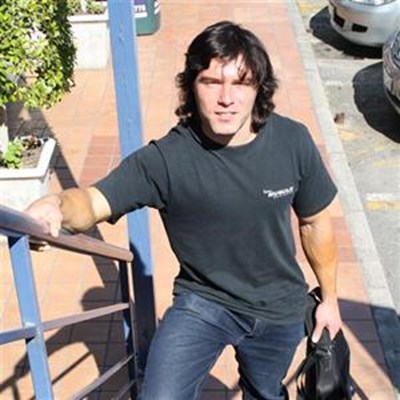 Modern day Tarzan... DeWet du Plessis, armed with a laptop and mobile phone is making headway with his movie. Photo: Pauline Lourens
GEORGE NEWS - An earnest, young man from George with an obsession to star in Stephen Somer’s 2012 Hollywood Tarzan, has caused quite a stir on the internet.

His home-manufactured, short promotion film in which he stars as Tarzan, has thus far attracted hundreds of hits on YouTube.

DeWet du Toit (23) is undeterred by derisive comments received during an interview with kykNet’s Rian van Heerden, who was amused at his attempts to attract the attention of Hollywood film producers. Clad in a skimpy tiger "lappie", the shoots showed off his brawny, have-been-body-building torso to best advantage.

Unfazed, DeWet has since gone on shooting a new adventure drama in the Outeniqua mountains. He, in the star role as Tarzan, goes to the rescue of a beautiful blonde Jane. She has fallen into the paws of kidnappers, who happen to be poachers. It requires some agile leaps onto a railway trolley. This is where the local tourism trolley-railwaybus, the Outeniqua Power Van, came in handy.

He is also the director, financier, location hunter and did the casting. His twin brother, Rudolph who supports his dream, was on hand during takes in the mountains to give moral support.
DeWet has encountered a vexing logistical hurdle. He needs a Zulu village for his next shoot.
He is aiming to have the film in the can by next month and its premiere in the Garden Route by October. He hopes that the film will net some money, enough to pay for his trip to Hollywood where he is determined to convince film producers to cast him as the next Tarzan.

Impressing Hollywood
"While the other actors will just turn up with a portfolio to audition, I will arrive with a fully-fledged movie to show my talents," said DeWet over a cuppa at a local coffee shop. Apparently the Hollywood bosses are willing to cast an unknown actor.
He has dyed his blonde locks black -in reaction to the criticism he received for wearing an ungainly wig in his first movie clip.

When I enquired whether there is any chemistry between him and the pretty local model, Chanieel du Plessis who stars as Jane, the blue-eyed, bodybuilder blushed slightly and said there was definitely on-screen chemistry.

Getting himself and the three local cameramen from Zodiac Media Production to Durban to Shaka Village for the next shoot, is going to cost a mint. He stayed within his budget by using locations like the Knysna Elephant Park, where he rode the elephants. The reptile park at Victoria Bay was also used for some shots of a boa constrictor. ByGraceAlone will feature in a wedding shot, where he will arrive in a horse drawn carriage.

To raise funds for the movie, and enable him to take acting lessons, he has been giving talks at local schools on nature conservation.

DeWet has some acting experience. He took acting lessons and starred in some TV advertisements. Craig Bruwer of Warner Brothers who has seen his YouTube debut, has advised him to further his career by taking more acting lessons in Hollywood.

As a youngster who loved playing on their family farms in Namibia and later in Rustenburg, he had big dreams. And now he is pursuing a childhood dream to take Hollywood by storm. For more information contact DeWet on 072 782 9289.

Lovely Jane, local model Chanieel du Plessis in one of the scenes shot in the Outeniqua mountain. The movie will premiere here in George. DeWet du Toit will then use it as a demo to convince Hollywood casters that he is their next star.