Local Tarzan in series on eccentrics 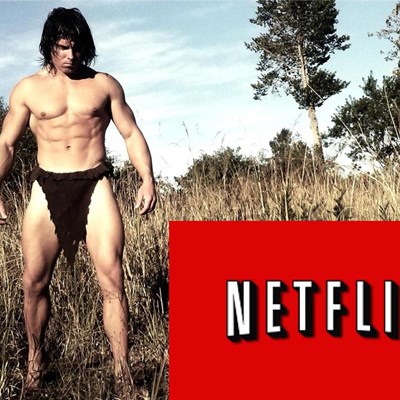 De Wet du Toit, who produces Tarzan movies together with his twin brother Rudolf, can be seen on Netflix TV Channel in an episode of Eccentrics, "Living like Tarzan".
GEORGE NEWS - Former Georgians, DeWet du Toit and his twin brother Rudolf, who have been living in Cape Town for a number of years, are still enamoured of the thriving film industry in Cape Town and De Wet still dreams of making the big time in a Tarzan movie.
De Wet told the George Herald last week, "As we speak, my latest Tarzan adventures are airing on Netflix TV channel. The actual footage was filmed a few years ago by Canadian producers of Chic TV.
The first episode of this programme, The Eccentrics, is titled "Living like Tarzan" and focuses on my day-to-day lifestyle as Tarzan, which ranges from exploring mountains, swimming in waterfalls, entering towns wearing just my loincloth and presenting school seminars to inspire the youth."
DeWet, who continues to be obsessed with starring in a Hollywood Tarzan movie, has begun shooting yet another version of his previous Tarzan movies with a view of showing it to Hollywood producers. His previous film shorts and teasers caused a stir on YouTube.
The brothers seize every opportunity to work as extras in various movies, and have acted in international films such as The Last Post, where they had to be soldiers, drive Land Rovers and use guns. The twins also made a brief appearance in a February episode of SA's 7de Laan.
Shark movie
DeWet has become a seasoned stuntman and in the USA production Empire of the shark, a post-apocalyptic movie, he did several underwater shots. "I had the honour to work with well-known stunt coordinators Phil Tan and Winston Chong. Filming took place in Muizenberg, Gordon's Bay and Hout Bay."
DeWet is excited about the future. "We are booked on a new big budget TV series called Troy, which will be shot in the vicinity of Cape Town and will take 10 months to film. And then the production of our long-awaited Tarzan pilot film called Tarzan: Apocalypse starts this month and is due to be sent to Universal Pictures in Hollywood to hopefully kick-start a feature film.
For an overview of everything we have done over the past five years, check out my showreel on YouTube called: Tarzan Showreel 2016."
ARTICLE: PAULINE LOURENS, GEORGE HERALD JOURNALIST
'We bring you the latest George, Garden Route news'