ENTERTAINMENT NEWS - Little Richard, whose outrageous showmanship and lightning-fast rhythms intoxicated crowds in the 1950s with hits like “Tutti Frutti” and “Long Tall Sally,” has died. He was 87 years old.

Tributes quickly poured in for the late rock king, with the co-founder of Chic, Nile Rodgers, dubbing the death “the loss of a true giant.”

With a distinctive voice that ranged from robust belting to howling falsetto, Richard transfixed audiences and became an inspiration for artists including The Beatles as he transformed the blues into the feverish new style of rock ‘n’ roll alongside Fats Domino and Chuck Berry.

His raunchy 1955 song “Tutti Frutti,” even with its gay sex theme toned down for radio, became a sort of opening salvo of rock ‘n’ roll’s entry into American life, starting with his nonsensical but instantly thrilling first line: “Awop bop a loo mop / Alop bam boom.”

A consummate entertainer since childhood, Richard would play piano with one leg hoisted over the keys and, in one legendary concert in Britain, played dead on stage so effectively that the venue sought out medical help before he resurrected himself to an astounded crowd.

But Richard was one of rock’s most torn personas and he never became an obvious icon for the African American or gay communities.

Once open by the standards of his time about his attraction to men, Richard became a born-again Christian and renounced homosexuality, treating it as a temporary choice in a manner that is anathema to the modern gay rights movement and psychologists.

And while he was one of the first African American artists to cross the racial divide, a younger generation of black DJs had little interest in an artist seen as embedded in the white mainstream. 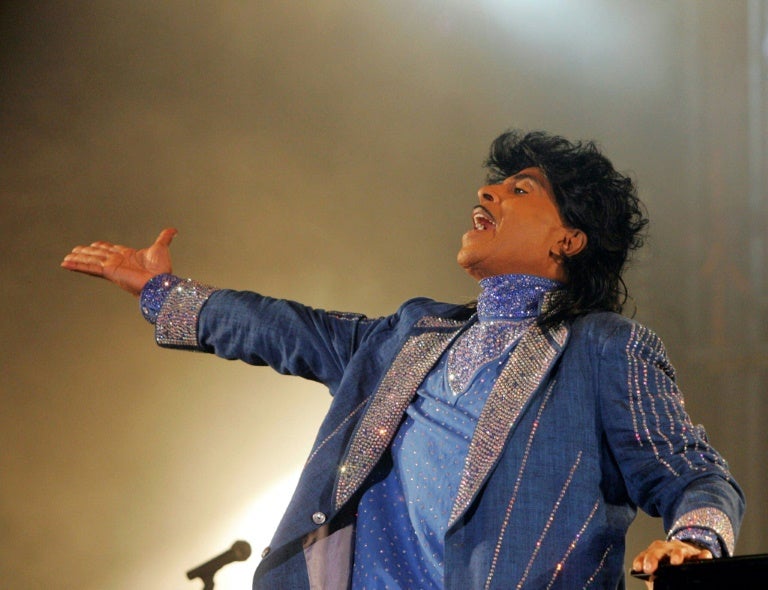 Mentor to rock’s greats
But his influence was incalculable. Early white rockers including Buddy Holly, Jerry Lee Lewis and Elvis Presley all pursued Richard’s sound and covered his tunes.

The upstart Beatles and Rolling Stones served separately as his opening acts when Richard toured England and a young Jimi Hendrix and members of Earth, Wind and Fire played in his back-up band.

After meeting the star-struck young Beatles, Richard proposed that the Liverpool lads singing “Love Me Do” come with him to the United States — an idea rejected by Richard’s management, to their sore regret later.

And David Bowie was mesmerised when he saw one of Little Richard’s several movies, with the then nine-year-old deciding to learn the saxophone and later saying, “If it hadn’t have been for him, I probably wouldn’t have gone into music.”

Born Richard Wayne Penniman on 5 December 1932, the future star was raised in grinding poverty in Macon, Georgia. His father sold bootleg liquor and owned a tavern, where he was shot dead in a dispute when Richard was starting his career.

Richard, despite his stage-name, stood 1.8 meters (five-foot-10) but was skinny and was born with a deformity of different sized legs. Mischievous as a child, Richard lingered in churches for their music and was noticeably effeminate.

In his 1984 authorised biography, Richard recalled his father as saying to him, “‘My father had seven sons and I wanted seven sons. You’ve spoiled it, you’re only half a son.'”

“And then he’d hit me. But I couldn’t help it. That was the way I was,” Richard said.

‘Tutti Frutti’ reborn
A key break came in 1947 when Sister Rosetta Tharpe, the Gospel singer whose stage persona came to influence rock, spotted him singing at the Macon City Auditorium where Richard had a part-time job selling soft drinks.

Richard developed a low-key career singing around Georgia, including in underground drag performances, when he was approached by record labels enticed by the growing consumer market for music.

But success was not immediate: Early recording ventures with RCA Victor and Peacock Records, with Richard on boogie-woogie piano or leading R&B arrangements, fell flat.

But the song caught the ear of Bumps Blackwell, a producer from Specialty Records, a Los Angeles label focused on African American artists which had reluctantly signed Richard after he persistently phoned its office.

Within 15 minutes and only three takes, Little Richard had recorded his defining hit, now with the tame lines, “Tutti frutti / Aw rootie… I’ve got a girl named Sue / She knows just what to do.”

The song — with its infectious rhythm, high decibel level and lingering sense of naughtiness — triggered a reaction never seen before.

In a 1956 concert in Baltimore, women took down their underwear and threw them on stage as police intervened to prevent fans from rushing the stage or leaping from the balcony in euphoria.

“Richard arrives and he’s attacking the piano; he’s banging on it. He’s not crooning; he’s screaming,” said Chris Morris, a music scholar who remastered his 1957 album “Here’s Little Richard,” which featured “Tutti Frutti” and other early hits including “Long Tall Sally” and “Rip It Up.”

“There had never really been a figure who came out of R&B who was that extroverted or loud or wild.”