Battle of the Jazz Bands: Last chance to enter

Bands that want to enter for the Battle of the Jazz Bands this year have only one day left, as entries close at 12:00 tomorrow, Friday 19 April.

ENTERTAINMENT NEWS - Bands that want to enter for the Battle of the Jazz Bands this year have only one day left, as entries close at 12:00 tomorrow, Friday 19 April.

The popular annual All That Jazz festival takes place at the Bravo Lounge in the Garden Route Casino from 26 to 28 April. The fee is R100 per entry and bands need to include at least two old-school jazz songs as well as a mandatory song (jazz version) by Queen, Crazy Little Thing Called Love.

Only two vocalists per band will be allowed.

The first prize is R7 000 cash as well as a video, sponsored by Philip Vermaak of VHM Productions. This year the runner-up prize has been increased to R3 000, with the third band receiving R1 500.

There are also prizes for the best instrumentalist as well as the best vocalist.

Bands that want to enter can contact Hamish Cairns on 044 606 7777 or send him an e-mail to Hamish.cairns@tsogosun.com. 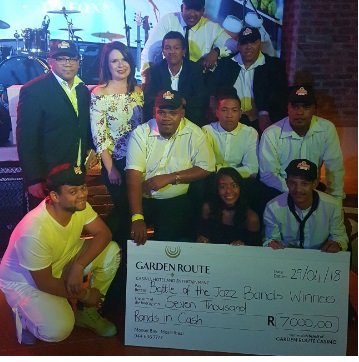 Prerogatives, winner of the 2017 and 2018 Bravo Lounge Battle of the Jazz Bands. The field is wide open this year as Prerogatives will be competing. They are, however, part of the opening show with Craig Lucas on Freedom Day, Saturday 27 April.

Read more about: battle of the jazz bands