Khumba to premiere on stage in George 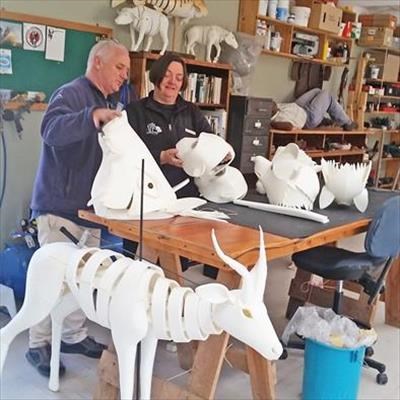 World-renowned puppeteer and Hoekwil resident Roger Titley has agreed to help train the production team to make the masks and puppets needed for Khumba. Here he shows theatre manager Heather Stead some examples at his studio.

ENTERTAINMENT NEWS - In what is thought to be a first, the popular animated film Khumba is to be presented as a stage play in George. The Oakhurst Insurance George Arts Theatre production team are excited to have been given the rights to put on the stage play version of the delightful South African computer-animated comedy film.

The world-renowned puppeteer Roger Titley has agreed to help train the production team to make the masks and puppets needed for Khumba. Titley, who lives in Hoekwil, said on Friday during a get-together with Heather Stead of the Arts Theatre that he will do this as part of his community involvement stance.

Khumba the movie is directed and produced by Anthony Silverston and written by Silverston and Raffaella Delle Donne. It was the second movie made by Triggerfish Animation Studios.

The film is about Khumba, a zebra who is half-striped like a quagga and blamed for the lack of rain by the rest of his insular, abusive, superstitious herd (except his dad, mom and Tombi). He embarks on a quest to earn his stripes. The film was dedicated to the founder of the Quagga Breeding Project, Reinhold Rau, who died in 2006.

Rau was known for his efforts to use selective breeding to recreate the extinct quagga, a close relative of the plains zebra.

A thrilled Stead said this week, "We have been given the rights by Triggerfish Animation Studio to use and perform the story, characters, soundtrack, logo and images of Khumba royalty free at the theatre - and other venues, should that happen. This is an amazing honour and we are incredibly excited to put this world premiere on in George. We have been given the rights to rewrite the story to suit the stage production in English and Afrikaans, as we would like to take the production to the KKNK next year."

Carina BeukesThe George Society of Arts production team has been hard at work on the project. The script was written and the show conceptualised by Carina Beukes, who was responsible for the staging of the very popular and creative Still Wishing Upon a Star shows, as well as The Witches by Roahl Dahl with Pat Savage. She has two co-directors, Bronwyn Stammer (Jungle Book, Pirates, Girl with the Golden Locks) and Madie Calitz (As die Kat Weg Is, Pinocchio and co-director of Aladdin). AuditionsAuditions will be held on 31 July and 1 August from 19:00 to 21:00. Anyone older than 16 can audition for this show. Please prepare a short two-minute dramatic monologue or excerpt from a play. Be creative. We look forward to Khumba, the stage play, in December 2017 and early 2018. And we hope to do the Afrikaans version by April.