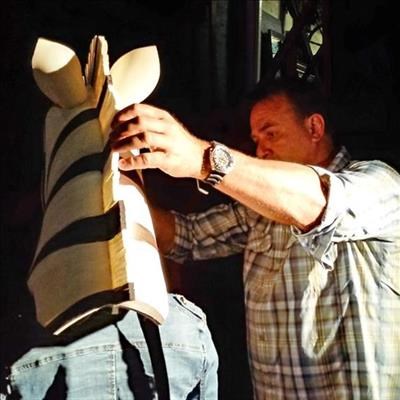 Peter Beukes holds one of the animal masks for Khumba at the Oakhurst Insurance George Arts Theatre.

GEORGE NEWS - The stage play Khumba is currently still in the rehearsal phase at the Oakhurst Insurance George Arts Theatre.

Theatre manager Heather Stead says, “A photograph of an animal mask being crafted by Pieter Beukes was released as a ‘sneak preview’ of what is happening at the theatre to give an idea of what the show will look like.

"There are no ‘sneak preview shows during rehearsals’ this week.

We apologise to the George public for this error.”

The show runs from Thursday 7 December to 10 December and again from 13 to 17 December.

There will be 2 specials running in December, so take advantage of these - on Thursday 7 December and Thursday 14 December are at a special price of R50 per person.

Bookings for the show can be made online at www.georgeartstheatre.co.za.