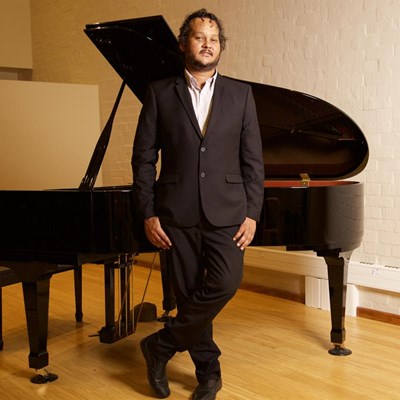 Ramon Alexander, composer, pianist and arranger who at one time attended school at York High in George is the leader of seasoned musicians performing in George on 17 June at the Oakhurst Insurance George Arts Theatre.
GEORGE NEWS - An exciting jazz concert with some of the best jazz musicians in South Africa is being held at the Oakhurst Insurance George Arts Theatre on Saturday 17 June at 19:30.
This is a departure from the classical music shows that the George Music Society usually brings to George.
Ramon Alexander Jazz ensemble consisting of Ramon Alexander, composer, pianist and arranger, as well as Annemie Nel, drummer, Lionel Beukes, bassist and Byron Abrahams, saxophonist, will treat jazz lovers to an extraordinary repertoire including original works by Alexander.
Lynette Petersen, extraordinary local vocalist and music teacher at Outeniqua High, will join this exciting group of young musicians for a jazz lovers' treat.
Both Lynette Petersen and Alexander attended schools in George. Another music prodigy from George, Kerwin Albertus, a young saxophonist from Outeniqua High, will also perform.
Alexander's second solo album entitled Echoes from Louwskloof won critical acclaim at the Cape Town International Jazz Festival (CTIJF).
Georgians can expect an unusual array of music as from an early age, before his discovery of jazz, Alexander was influenced by the brassy sounds of Moravian hymns and the surviving legacy of Khoisan music in the community around the historic mission station near Mamre where he was born. On Echoes from Louwskloof, the obvious pride that the artist, who has had classical piano training, takes in his roots, comes through strongly.
Bookings for this spectacular jazz concert are essential.
More information is available on www.georgemusicsociety.co.za. Tickets are available from the George Arts Theatre or online at georgeartstheatre.co.za. For more information visit the George Music Society Facebook page or contact Henk at 083 414 0350.
'We bring you the latest George, Garden Route news'