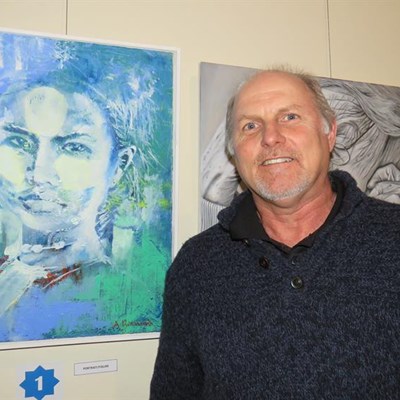 Andrew Barnard's striking portrait titled 'Beyond Wisdom' won first prize in the Visual Expressions art competition in the Portrait Figure category,
SOUTHERN CAPE NEWS - The winners of the Visual Expressions art competition were announced on Wednesday 10 August at the George Museum.
Altogether 141 paintings were submitted by 56 artists.
The sociable cheese and wine function organised by the Southern Cape Association of Visual Arts (Scava) was attended by artists and their supporters. Maura St John was named the winner of the Landscape/Interior category for her painting Richtersveld Rocks.
The runners up were Pauline Janet Becker and Zyla Gerber.
In the Still Life category Carol Eady with her painting Fruit Salad was named the winner, and Tersia Hoffmann and Donald Bands came second and third respectively.
In the Portrait Figure category Andrew Barnard with his painting Beyond Wisdom was given the first prize, Elmari Swanepoel second prize and Aubin de Jongh third prize.
In the Abstract section Karin Combrink with Blue By You was the winning entry, with Irma Gerber being awarded the second prize and Sheila Collins third prize.
An almost larger than life painting entitled Reclining Nguni entered in the Wildlife category was won by Shirley Craib, with Andrew Barnard winning second prize and Susan Alexander third prize. 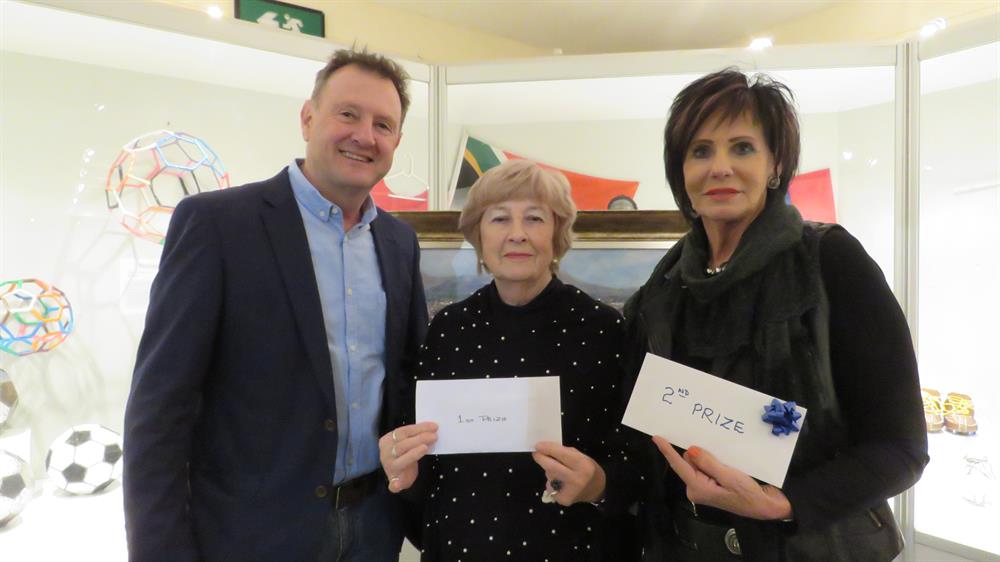 Tim Kirby, art judge, with Maura St John who was named the winner of the Landscape/Interior category for her painting 'Richtersveld Rocks'. Tertia Hoffman came second in the Still Life category.
Incredible
Altogether R10 000 worth of cash prizes and R10 000 in vouchers, were awarded. One of the competition judges, Tim Kirby, principal of Sothebys and former art gallery owner (in the 1980s), in a brief address said he was impressed with an "incredible exhibition and the efficient organisation behind it".
Kirby who was a graphic artist in his days, said he was pleased to see that to a certain extent the ongoing series of exhibitions held in the George Museum are filling the much-needed void left by the closure of Strydom Gallery.
Daan Roestoff, who is retired from the Stellenbosch University's art department, was the other judge.
Scava Chairperson Ken Smith reminded the audience that all the art is for sale.
The Visual Expressions exhibition comes to an end on Thursday 25 August at the George Museum in Caledon Street. The opening hours are from Mondays to Fridays from 10:00 to 16:00 and on Saturdays from 10:00 to 12:00.
Travelling Sanlam National Portrait award exhibition
Smith urged art lovers to diarise the dates - 5 September until 24 September when the travelling Sanlam National Portrait award exhibition featuring the top 40 winning entries can be viewed by the public at the George Museum.
The official opening on Saturday 3 September is by invitation only). George artist Carol Eady is one of the 40 finalists and her self-portrait titled Nanna Marmite, can also be viewed.
'We bring you the latest Garden Route, Klein Karoo, Hessequa news'