ENTERTAINMENT NEWS - The glitz and glam of the awards shows was still very much present at the fourth Royalty Soapie Awards hosted by talented hosts Mpho Popps and Lerato LKG Kganyago.

The pre-recorded award show was aired for the public on Saturday evening, 26 September, 2020 on SABC 1.

Things were very much different this year due to the pandemic no fans were present at the recarpet carpet and a very small audience too.

Despite all of the production changes, the show must go on and the biggest winners of the night was Gomora.

Shekinah performed her track ‘What a Love’ as the technical categories started off the show. Outstanding Editing Team went to Isibaya and Outstanding Directing Team was awarded to Gomora.

Presenters included the likes of LootLove, 7de Laan actress Nobuhle ‘Mimi’ Mahlasela was stunning in her Gert Johan Coetzee dress and said set life in 7de Laan is quite hectic.

Speaking to The Citizen she said her character Aggie will be experiencing a lot of drama and audiences must tune in to view it all. On her personal favourite shows said; “I love watching The River a lot and season two of Housekeepers.” And hinted that she would to be in the next season of the hit show.

Break out star Sannah Mchunu who won Outstanding Supporting Actress for her portrayal of popular and loved character Zodwa in Gomora. She said the love she has received is like a dream. “I feel like breakdancing yazini,” she joked.

“The fans love Zodwa, she has pushed my career, and finally I am being recognised.” The show also walked away with the top praise, voted by the people, Most Popular Soapie of the Year.

In his acceptance speech director and executive producer, Thabang Moleya said they did not predict winning the award.

“We did not see this one coming, I want to thank our writers, thanking for writing for us. Our producers, all the ladies in production and the other directors.”

Gomora kept winning on the night with Outstanding Newcomer going to Sicelo Buthelezi as Teddy.

The Queen was also given a nod, Outstanding Supporting Actor went to Sthembiso Khoza as Shaka Khoza. In his acceptance speech, the confidence was beaming through the mic, with the actor thanking the Fergusons and Royalty Soapie Awards for the recognition. 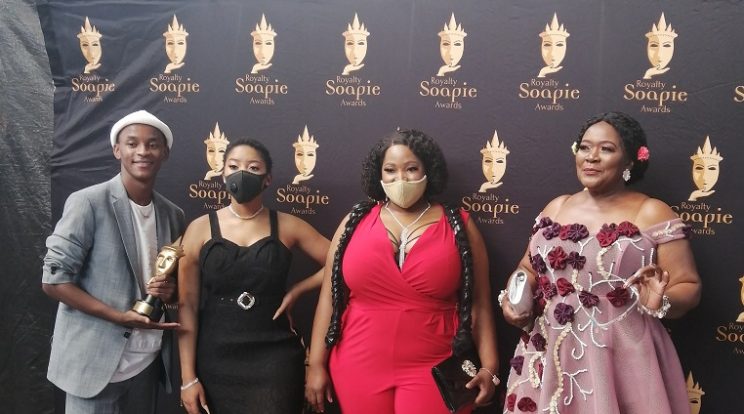 I will see what is left after the masses have finished shopping.

I can't be bothered, it's just another day for me.