While local fans have staged protests outside the courthouse, the online campaign spans globally, from Britain to the Philippines.

Online, the #FreeBritney movement has united fans from the US to Asia and Latin America.

ENTERTAINMENT NEWS - When two comedians started a podcast about Britney Spears's quirky Instagram posts, they had no idea it would fuel a global online movement uniting superfans with rights activists in outrage over the star's legal situation.

Britney's Gram began in 2017 as a lighthearted podcast in which hosts Tess Barker and Babs Gray dissected the eccentric mix of memes, selfies and dance videos posted on the singer's account.

But the pair grew increasingly intrigued - and concerned - by the legal conservatorship that Spears had been under since 2008. The arrangement gave the popstar's father widespread control over her finances and personal life, while forcing her to pay lawyers hundreds of thousands of dollars in fees.

"The podcast organically started to transform into more of an investigative podcast," Barker said, ahead of the latest court hearing over Spears's conservatorship in Los Angeles on Wednesday.

The comedians spent hours sifting through court documents, hoping to understand whether the arrangement was really working as intended: protecting 39-year-old Spears, who had suffered a high-profile breakdown in the mid-2000s under the intense glare of the paparazzi.

Other fans-turned-sleuths began obsessively combing the singer's cryptic, emoji-laden posts for clues about her well-being. Increasingly they worried that she had been "silenced" under the conservatorship, unable to speak out about how unhappy she really was.

In 2019, when Spears's Instagram had been mysteriously inactive for weeks, an audio message from a key source landed in the podcast's inbox. The caller, who identified himself as a former paralegal, alleged that Spears had been forced into a mental health facility months earlier. 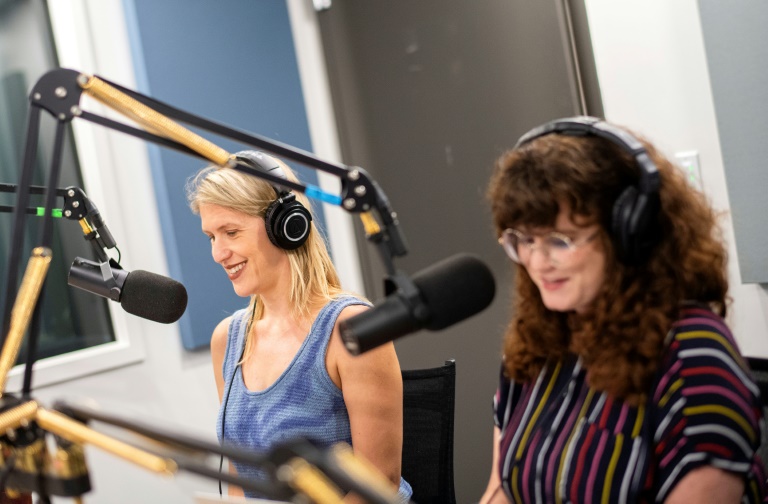 "You guys are onto something," he told Barker and Gray. "What is happening is disturbing to say the least."

The message, which aired in a viral episode of the podcast titled "#FreeBritney", sent shockwaves through Spears's fanbase - but it would also gain the attention of campaigners with no interest in gyrating dance moves or hits like "Baby One More Time".

The power of online fandom

Hundreds of thousands of online posts have been tagged #FreeBritney - half a million tweets alone on June 23 when Spears gave bombshell testimony, saying she had been drugged against her will and was not even allowed to control her own contraception.

While local fans have staged protests outside the courthouse, the online campaign spans globally, from Britain to the Philippines. A quarter of #FreeBritney tweets are posted from Brazil, according to Twitter analysis tool Hashtagify. 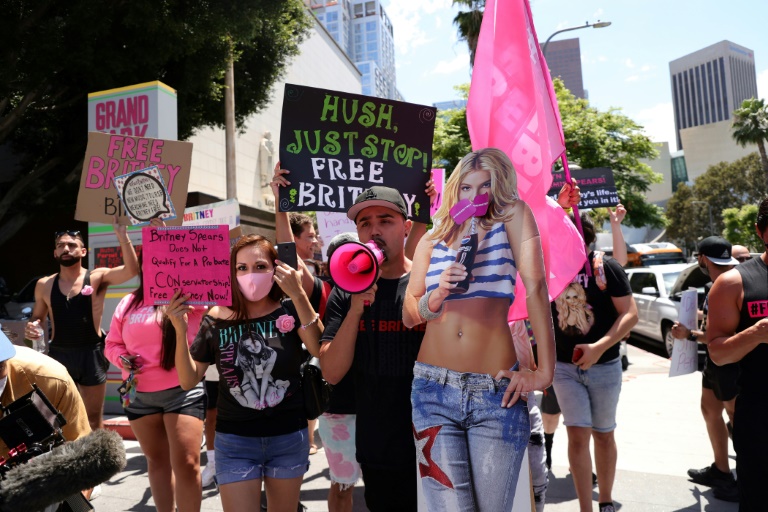 In Los Angeles, the movement has spilled into real-life protests outside the courthouse.

"In the past people could show up at a courthouse with signs saying 'I love you', but it's way different if you show up on Twitter. You've got a global reach," said Katherine Larsen, editor of the Journal of Fandom Studies.

She sees the #FreeBritney movement as part of a growing trend "where fans have been able to harness social media and get something done", pointing to followers of K-pop superband BTS - who raised $1 million in a day for the Black Lives Matter movement - as another example.

Like many fans, Andrea Corina Lopez felt compelled to join the campaign because she felt a personal connection with Spears, having similarly struggled with her mental health.

She set up a #FreeBritney YouTube channel from her home in Chile to help Spanish-speakers follow the latest developments - partly because of the chilling realisation that "what is happening to her could happen to someone like me". 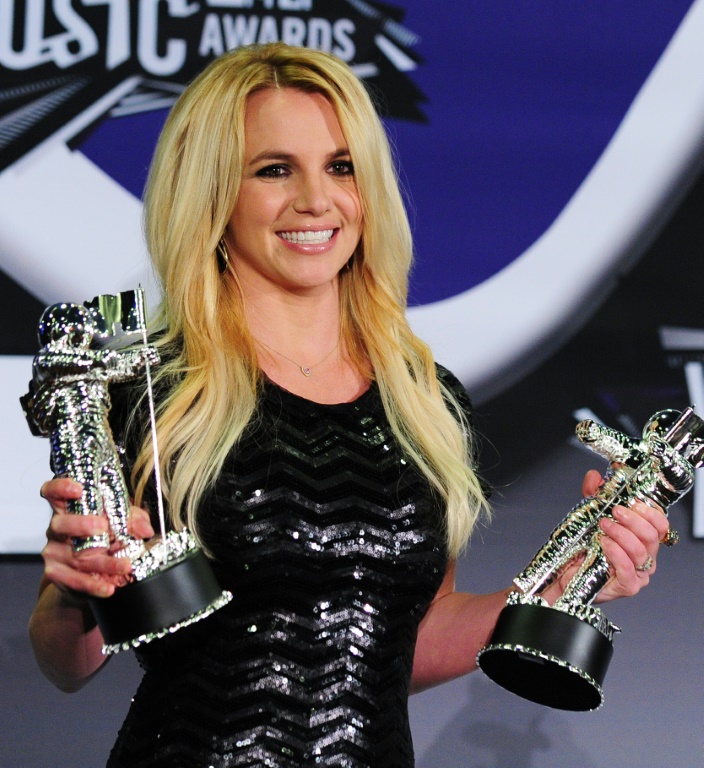 Spears has been under a conservatorship, giving her father widespread control over her personal life and finances, since 2008.

As the movement has gained steam, disparate groups have joined forces.

Disability and civil rights campaigners say Spears's case highlights how easily vulnerable people can be abused; lawyers have chipped in to help fans understand the finer points of conservatorship legislation.

"There are many people who are part of the #FreeBritney movement who don't even listen to her music," said Gray, who has just launched a new deep-dive podcast with Barker into the guardianship, "Toxic".

For fans, the fact that Spears's conservatorship has now captured public attention is vindication of their efforts to raise the alarm - in some cases, for years.

Jordan Miller, who runs the fansite BreatheHeavy, was signing posts "Free Britney" as early as 2009.

"It took years of writing about it, speaking about it, for the world to see what it felt like I had been seeing for a long time," he said. 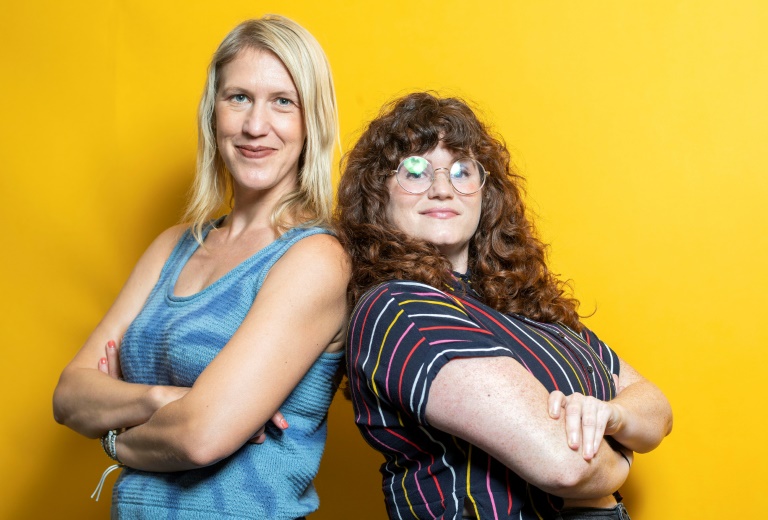 Barker, left, and Gray say a successful outcome would be Spears 'just getting to enjoy the same liberties that we think everybody should be able to enjoy'.

Fans who saw something sinister in Spears's legal arrangements were initially met with skepticism. This was not helped by the conspiratorial leanings of some #FreeBritney activists, convinced that each of her Instagram posts was laced with coded messages.

But all factions of the movement agree on one thing: they're looking forward to a day when the hashtag can be retired for good.

"A happy ending is Britney Spears just getting to enjoy the same liberties that we think everybody should be able to enjoy," said Barker.