Cast and crew of 'Paranormal', which is now streaming on Netflix in nine languages in around 190 countries.

Billed as a mystery and thriller production based on the best-selling young adult fiction novellas of Egyptian author Ahmed Khaled Tawfik, Paranormal was released last week in nine languages to audiences in around 190 countries.

"With such a huge fanbase, it was a logical project for us to come on board," Ahmed Sharkawi, Netflix's head of Arabic and African original content, told AFP.

"We're excited for the fans to see their favourite characters - monsters and ghosts - coming to life."

But Paranormal, Netflix's first Egyptian series, also marks a shift in the entertainment industry in Egypt, and the wider Arab world.

Egypt has traditionally been a cultural powerhouse in the region, producing dozens of movies as well as gripping drama and comedy series every year.

But after its golden age in the 1940s to 1960s, critics say the film productions had in recent years lost its touch.

Many hope the growth of online television services could inject new life into the industry - and bring Egypt's acting to a far larger audience.

"We are beginning to see some filmmakers bypassing state and private structures of financing, and go straight to Netflix," said Marwan Kraidy, an authority on Arab media and dean of Northwestern University in Qatar.

"This model appears to be gaining steam in the Arab world."

The new six-episode series of Paranormal, set in the 1960s, follows the adventures of Refaat Ismail, a haematologist played by Ahmed Amin, who encounters supernatural occurrences.

Along with his trusty sidekick Scottish scientist Maggie Mackillop, played by British-Lebanese actress Razane Jammal, they solve occult mysteries, taking them beyond the splendour of Cairo and deep into the Libyan desert.

"We wanted to create high-quality content without losing the Egyptian spirit of the work," said director Amr Salama, a mainstay of international film festivals with art-house films such as Sheikh Jackson, as well as episodes of Saturday Night Live Arabia.

"We didn't want it to turn out like an American series that's dubbed in Arabic. Even with the special effects and myths and spooky tales, we wanted them to be authentically Egyptian".

On social media, Egyptian reception of Paranormal has been mixed, with many lampooning the show's use of special effects, while others praised the subtle acting of lead actor Amin.

The bespectacled, softly spoken actor, who shot to fame in Egypt with his online comedy sketches, spoke eagerly about showcasing Egyptian talent.

"My starring in Paranormal comes with the challenge of conveying Egyptian drama to an international stage," he told AFP.

"It's a test of seeing whether we can compete and draw audiences beyond the Arab world."

Kraidy likens Netflix's entry into the Arab market to how the HBO television network in the United States gained traction in households for nuanced stories in landmark shows such as The Sopranos and The Wire. 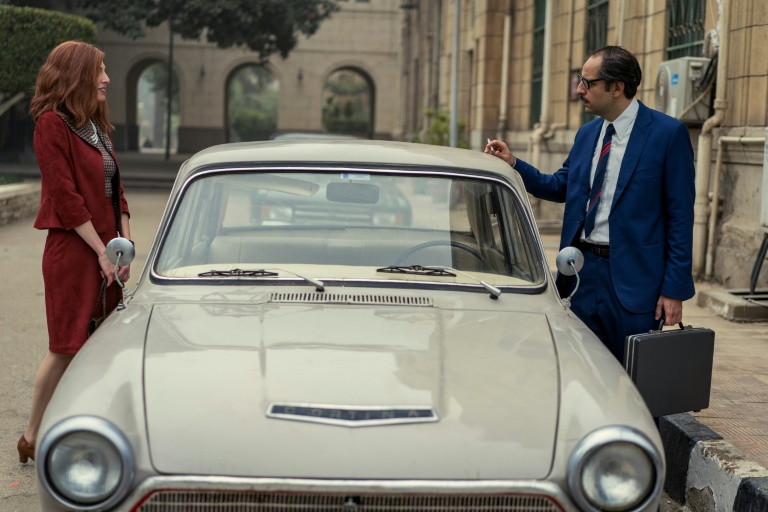 'Paranormal' follows the characters of Razane Jammal (L) and Ahmed Amin as they investigate supernatural happenings.

"The major change... is the obliteration of the rhythm of television consumption and the fragmentation of the watching unit from the family to the individual," he added.

"Now everyone watches what they want, when they want... on a bunch of devices."

The critical acclaim of Arab-American actors and storytellers in Hollywood recently has also been a contributing factor.

Netflix's subscriber base in the region is just under five million, but the streaming site hopes to double that by 2025 with a slew of Arabic content offerings, including a musical by legendary Egyptian singer Amr Diab later this year.

"I hope it puts a spotlight on the talents that we have here," she said. "I hope that we have more of a chance to bridge the gap between East and West."

Cast and crew of  'Paranormal', which is now streaming on Netflix in nine languages in around 190 countries.