The beaming princess got married in a vintage dress borrowed from her grandmother, and the same tiara the Queen had worn on her own wedding day.

ENTERTAINMENT NEWS - Buckingham has released two photographs from the wedding of Princess Beatrice to property tycoon Edoardo Mapelli Mozzi, who tied the knot on Saturday.

The couple said their vows in a small ceremony at The Royal Chapel of All Saints in Windsor, and the pictures show a beaming Beatrice and her new husband leaving the chapel through its flower-covered archway.

The second picture shows the couple outside the chapel, with Beatrice’s grandparents, Queen Elizabeth and her husband, the Duke of Edinburgh, Prince Philip, seemingly maintaining a healthy social distance from the couple.

Conspicuous in their absence from the pictures were Beatrice’s parents, most notably her father Prince Andrew, who has been avoiding the spotlight for several months following his alleged ties to paedophile and sex trafficker Jeffrey Epstein and his girlfriend and fixer, Ghislaine Maxwell.

The palace did, however, confirm that the prince had walked his daughter down the aisle.

According to the BBC, Beatrice’s wedding dress was a loan from her grandmother, while the tiara she wore is the same one the Queen donned for her own wedding in 1947. 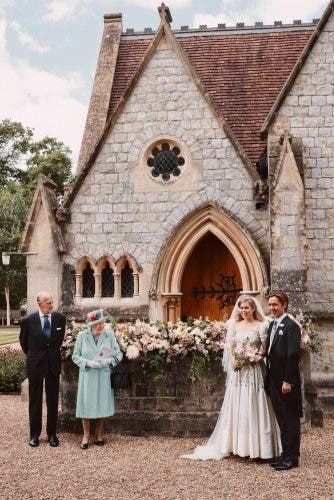