As Die Kat Weg Is at arts theatre 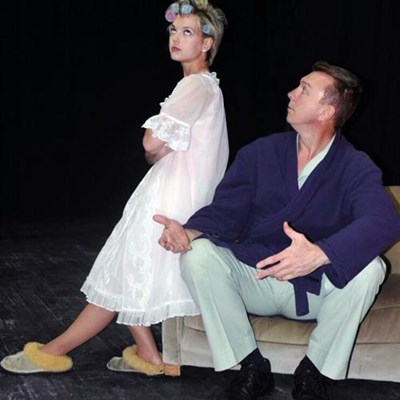 Tanja du Plessis and Willie van Zyl play Marie and Neels in As die Kat Weg Is, which will be brought to stage at the Oakhurst Insurance George Arts Theatre on Friday 11 September at 19:00 and Saturday 12 September at 10:00.
GEORGE NEWS - As Die Kat Weg Is... is die muis baas! This old proverb is the basis for the latest offering from the George Society of the Arts that will have theatregoers in stitches this September. The hilarious two-act comedy is on at the Oakhurst Insurance George Arts Theatre at 19:00 on Friday 11 September and Saturday 12 September.
The show has an age restriction of 18 and tickets are R90 standard, R70 for theatre members and can be booked at the theatre box office, or by calling 044 874 3142. Block bookings of 10 or more will score you tickets for R50 each.
The theatre's marketer, Jo-Anne King, chatted to As Die Kat Weg Is director Madie Calitz about Afrikaans proverbs, the hysterical show’s origins and why the age restriction is so high.
What is As Die Kat Weg Is about?
Well, there are two sisters, Marie and Louise, who have totally different marriages - one is married to a boring old fart, Neels, and the other is married to a major flirt, Sarel. Neels's wife decides to organise a second honeymoon to rekindle their romance, while at the same time, her sister decides to leave Sarel. The sisters end up going on the honeymoon together instead, giving naughty Sarel and boring Neels an opportunity to play while the cat is away.
But will their secret antics stay a secret?
The play is a South African adaptation by Pierre van Pletzen - Oom Oubaas in 7de Laan - of an original American script by Johnnie Mortimer and Brian Cooke, the writers of popular TV series Three's Company.
Brilliant (George) actor Willie van Zyl, who has been involved at the George Arts Theatre for years now, plays Neels. Tanja du Plessis will knock your socks off as Marie. Carina Beukes plays Marie’s hilarious sister Louise - she’s famous for directing plays like The Disney Tribute, which had an extremely successful run in 2014.
Klikkerland is also her brainchild. Another Klikkerlander, Johnny Emmerich, plays Sarel - he has also been a part of the theatre for years, most recently playing one of the ugly sisters in the Beauty And The Beast pantomime. Then there are two more whose characters, played by Bianca Rautenbach and Bronwyn Stammer, are a secret - you’ll just have to see the show to see what chaos they are in charge of.
Article by Jo-Anne Anne King, marketing manager of Oakhurst Insurance George Arts Theatre