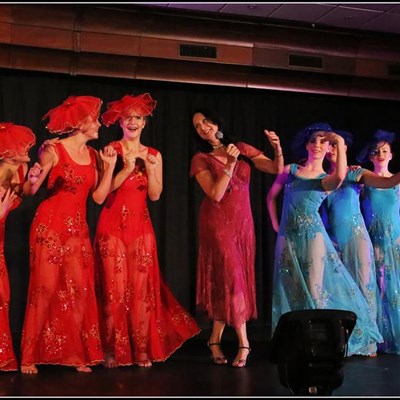 Dr Ronell van Aswegen (middle) sings the popular My Fair Lady song "I could have danced all night" and is surrounded by the Christelle Smit Dance School during one of the Fancourt Classical Concert series shows. Photos: Bill Zurich
GEORGE NEWS - The hugely successful Fancourt Classical Concert series, produced by Dr Ronell van Aswegen, has become an annual event that lovers of classical music are looking forward to with eagerness. The theme for 2016/2017 will be 'A Carnival of Classical Music'.
Those who have attended the concerts know they can expect superbly talented musicians, singers and dancers. The concerts are usually held in Fancourt's ballroom/conference centre where a custom-made stage and stage props are erected by professionals to provide the right atmosphere.
Fancourt management offered the voluntary post of artistic director to Dr van Aswegen, who founded the Fancourt Classical Concert series in 2013 and involved creating a platform for local Georgian musicians, dancers and artists.
During the 14 concerts produced so far, well-known opera singers and ballet dancers were also flown in to perform at Fancourt.
Career
Dr van Aswegen, who has two doctorates from the University of Pretoria: D.Mus. and D.Ed. and who lectured at the Pretoria Teacher's Training College, the University of Pretoria and UCT, fondly recalls how as a little girl she and her sister, Annelize, organised and gave their first mini house concerts - much to the amusement of their devoted parents Sally and Chris Müller. "They supported our singing and piano lessons in the most wonderful way."
Ronell was often invited to read papers at international conferences in Spain, the UK, the USA and Russia. She also sang in numerous recitals, operas and operettas for Pact Ballet and the Natal Performing Arts Council (NAPAC), and recorded for SABC Radio and TV. She is thus a highly regarded musicologist, pianist, soprano and choir conductor who frequently performs and lectures in George and the Garden Route.
Benefit concerts
Ronell is also the founder of the a benefit fund for talented musicians. Many students and colleagues played at the Van Aswegen residence over the last 20 years and received money to help pay for their instruments, lectures, practical lessons and auditions. She still carries on with these concerts.
The matinee shows and Fancourt Outreach Programme are her initiatives, enabling scholars and younger children to experience the wonderful world of classical music. During one of the musical shows featuring all-time favourite songs from musicals, Ronell was prompted to sing her favourite My Fair Lady songs and her daughter, Monique Zürich (who has been roped in as stage manager) also danced as a soloist during the Magical World of Cabaret. The list of artists who have participated are too many to mention.
Voldi George and Petronel Baard, George High School dancers and soloist Jeannette Ziady; The George Male Choir and The South Cape Children's Choir as well as soloists Thelma and Jovan Heyns have made their bow as well as the Christelle Smit Dance School and the Dance Academies Studio Group under Wehan van Jaarsveld and the Townsend-Geldenhuys School of Ballet.
Dates
Pencil in the following concert dates: Friday 28 October at 15:30: matinee performance and 19:00: evening performance; Friday 2 December at 15:30: matinee performance and 19:00: evening performance; and Friday 3 February 2017 at 15:30: matinee performance and at 19:00: evening concert.
Persons interested in receiving news and updates on the 2016 Classic Concert Series can e-mail their details to marketing@fancourt.co.za and stipulate in the subject line: Classic Concert database. To book phone 044 804 0186.
ARTICLE: PAULINE LOURENS, GEORGE HERALD JOURNALIST
'We bring you the latest George, Garden Route news'