Mexican actress Yalitza Aparicio, the first indigenous woman ever nominated for a best actress Oscar, is using her fame to raise awareness about indigenous and women's rights.

ENTERTAINMENT NEWS - A year after the movie "Roma" catapulted her from obscurity to an Oscar nomination, Mexican actress Yalitza Aparicio is using the spotlight to promote causes close to her heart: indigenous and women's rights in her country.

Taking a break from film sets, the 26-year-old from the Mixtec community in the southern state of Oaxaca is dedicating this year to working as a UNESCO goodwill ambassador for indigenous peoples.

In her new role, Aparicio - the first indigenous woman ever nominated for a best actress Oscar - returned to school this week to give a talk at Harvard University's Mexico Conference 2020.

In an interview with AFP in Mexico City, she said she understood that fame and her career would be "a series of ups and downs."

"So the thing is to use this current high to lend visibility [to indigenous communities] and to explain to more people the things that I have been concerned about," she said.

Aparacio became an inspiration to many Mexicans when she earned rave reviews for her role in "Roma," by Mexican director Alfonso Cuaron. The film ended up winning three Oscars.

Her "Roma" character Cleo is a domestic worker inspired by Cuaron's own childhood nanny.

The film's success not only brought her international plaudits, but she ended up doing interviews and photo shoots for top magazines such as Vogue and Vanity Fair - where indigenous faces are rare.

Of course, the praise was accompanied by some vitriol on social media.

Many with indigenous roots in Mexico have experienced discrimination, in a society that has been reluctant to acknowledge its own racism.

"We are not new faces, we are simply the people we always were, but who nobody had ever bothered looking at before," she said.

"May we never again be afraid to say, 'Enough! We exist too!'"

'I am a feminist' 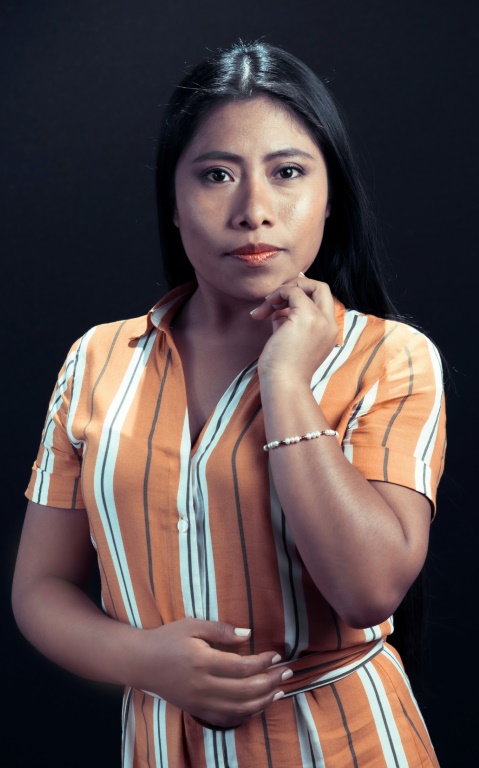 Mexican actress Yalitza Aparicio, Oscar nominee for the film 'Roma' in 2019, is spending this year working as a UNESCO goodwill ambassador.

On the back of "Roma," Aparicio connected with many ordinary women in Mexico, and pushed celebrities to lend their support to the Latin American feminist movement.

Chilean singer Mon Laferte invited Aparicio to appear in the video for her song "Plata Ta Ta," a high-octane reggaeton performance in which Aparicio wore a green headscarf, the international symbol of the struggle for women's rights.

In her native Oaxaca - the second place in Mexico after the capital to decriminalize abortion - conservatives have criticized her liberal stance, but she is holding firm.

"Every one of us is free to decide for themselves, depending on their situation," she said.

"I am simply supporting the right which all women have: we are free to make decisions about our own bodies."

Violence against women in Mexico - 10 are killed every day, according to the United Nations - and female empowerment come up often when Aparicio speaks, and she describes herself as a "feminist for equality."

"I am a feminist and I always have been," she said.

"Lots of times, people think being a feminist means being 'more than men' when in reality, it's just a question of seeking the equality that so many of us lack."

Back to her roots

Aparicio stumbled into the world of movies by chance.

Having recently graduated as a teacher, she accompanied her sister to a casting call - with no idea that she herself would be cast and it would change her life.

Her sudden flurry of globetrotting due to the success of "Roma" left her longing to return to her hometown of Tlaxiaco, a community of 40,000 people in the mountains who now see her as a star.

"When I go back home, they say to me, 'What are you washing the dishes for? You just sit down, you're a celebrity!' and I quip back that the plates aren't going to suddenly slip out of my hands," she said.

Aparicio used to dream that one day her students would come back to her and show off their university degrees: she now hopes her work will inspire others.

"I bump into more and more people who say 'Yes I can do this,' and that gives me lots of energy," she said with a smile.