A festival of jazz at the Arts 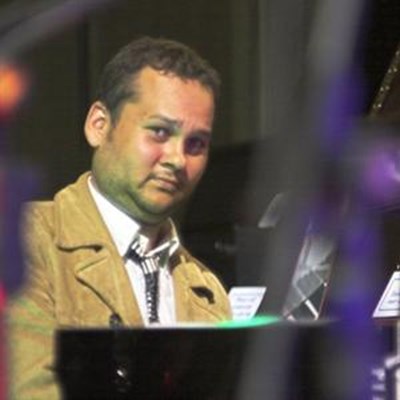 This group is on their way to take part in the Grahamstown Festival and is a must for all jazz lovers. The concert will showcase their impromptu jazz skills.

Alexander, a former York High matriculant, is a qualified winemaker, but decided to pursue a career in music. He has been playing piano since the age of ten and is classically trained. At the age of 15 he started playing his first gig as a lounge pianist.
He received his jazz training under the supervision of Merton Barrow at the Jazz Workshop in Cape Town. Since 2004, he has been a founder member of ESP Band and is currently the longest serving member of the group.
The group (as well as other groups and productions) has been under his musical direction ever since and he composes and arranges frequently. Alexander has performed with numerous artists in a variety of genres. He is also an educator and lectures jazz in the Music Certificate Programme presented at Stellenbosch University.

Prinsloo completed both his degree B. Drama (2009) and his B. Music Foundation studies (2010) at Stellenbosch University where he has been involved as a bassist in many musical ventures, particularly in the rock, jazz, and pop genres. He is currently the station producer at the radio station MFM 92.6 Move to the Music where he designs and edits audio on-air scenarios for core corporate clients.

In 2010 he landed the lead role in the highly successful theatrical run of The Cape Town Show at Rainbow Room - Mandela Rhodes Place, and received criti-cal acclaim not only as an actor, but also as vocalist and musician. Apart from playing in Ramon Alexander’s creative jazz project, Josh fronts his own alternative rock band as a vocalist and is in the process of producing a spoken word project that utili-ses the skills of various talented poets in the Stellenbosch area.

Nel completed a Honours in Music degree in 2006 with piano accompaniment as speciality at Stellenbosch University. She started playing drums full-time in 2007 and has ever since attended the National Youth Jazz Festival in Grahamstown. Last year she was chosen for the National Youth Jazz Band and very fortunate to work with Prof. Mike Campbell, who is the head of Jazz Education at UCT.
Annemie is a full-time percussion teacher at the Frank Pietersen Music Centre in Paarl and gigs regularly with local musicians in the Cape Winelands area such as Pierre-Henri Wicomb, Danelle De Vries, Basil Moses, Wesley Rustin and Gary Kriel. She is currently working with Ramon Alexander on his solo CD project

Petersen is the director of the Stellenbosch University Jazz Vocal Ensemble, also known as The Scat Cats. She completed both her BMus and BMusHons at the US and graduated (cum laude) in 2003 specialising in piano, voice and music edu-cation. Since then Lynette has been actively involved in various projects over the years, which include participating in the Artscape Youth Jazz Festival, the National Youth Jazz Festival, recording with various artists as well as teaching at the Music Certificate Programme. She is currently a music teacher at Bridge House School in Franschhoek. The concert takes place on Saturday, 14 May at 19:30 at the Arts Theatre. Tickets cost R80 for adults, R60 for Music Society members and R20 for children. Advance bookings can be made at the Arts Theatre on weekdays between 10:00 and 14:00 or phone the theatre at 044 874 3142.
Home-made pizza is included in the ticket. For enquiries phone 044 873 4092 or 083 389 2775.