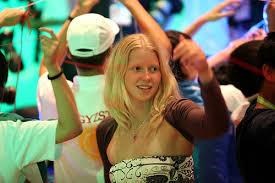 Blond bombshells Dmitriy Balandin and Yekaterina Rudenko have given Kazakhstan serious street cred -- blowing the backward image portrayed by the movie "Borat" out of the water.

"It's brilliant!" the 19-year-old told AFP after winning the 100m title. "It's a fantastic result. I won two gold medals. They are the first gold medals in swimming in Kazakhstan history. I'm so proud."

Balandin punched the water and roared in delight after twice stunning favourite Yasuhiro Koseki, widely hyped as the next Kosuke Kitajima by Japanese fans and media.

"I'm so tired but I won two gold medals for Kazakhstan," he said. "I didn't expect to win gold medals, my expectation was to win bronze. But when I came here I felt very nice, strong and powerful.

"I'm very proud to come from Kazakhstan and to see the flag of Kazakstan rise here."

Kazakhstan, which declared independence in 1991 after the break-up of the former Soviet Union and has a population of 18 million, has a rich sporting history, with notable Olympic success in boxing, cycling and weightlifting.

They sit fourth in the Asian Games medals standings.

However, after the 2006 spoof documentary "Borat", the country became synonymous with its bumbling main character squeezed awkwardly into his soviet-era suits and "mankini" swimming costume.

Rudenko, who has won silver medals in the women's 50m and 100m this week, said she was delighted to fly the flag for oil-rich Kazakhstan.

Asked about her European appearance, she laughed: "I'm the only European-looking one here! I was born and raised in Kazakhstan. It feels like home."

Rudenko warned there was more to come from the Kazakh swimmers in the future.

"Two silver medals means a lot to Kazakhstan," she said. "It's a good start but we're not done yet. It's just the beginning."