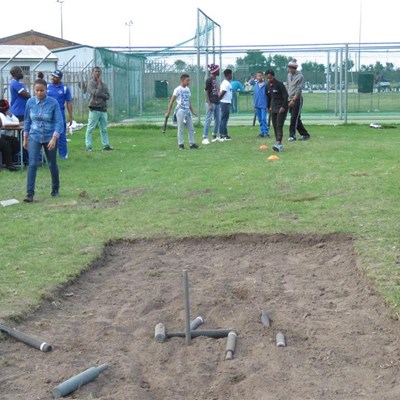 Also known as ncuva or morula, morabaraba is one of South Africa’s most popular traditionalgames. Similar to chess, the Oxford dictionary says the term ‘morabaraba’ is ¬derived from Sesotho and loosely translates to mean “mill” or to go around in a circle.
In its earliest form, it was played on a stone or rock, or the lines were drawn on the ground and players would use stones or bottle caps as movable bargaining pieces. Like chess, this abstract strategic game sees two players trying to outmanoeuvre each other by moving the pieces from one intersection to another until a winner emerges.

Kgati
Also known as ntimo or ugqaphu, kgati is a skipping game played by two people. Two players hold the skipping rope on each end, while the third player skips in a variety of ways while chanting and singing. In 2012, the South African Kgati team won gold at the 5th World Sport for All Games in Lithuania.
Diketo

Also known as upuca, magava or ukugenda, this is a coordination game played mostly by young girls. Ten stones are placed in a circle or a square. Each player then tries to grab the most stones, throw them in the air and catch them in one hand until all the stones are back in the circle or square.
Lintonga

This is a stick-fighting game made popular by boys herding livestock in the rural areas of South Africa. It is played between two people armed with two long sticks - one is used for defence and the other is used for offence. The competing opponents hit each other with the sticks. The one who hits the hardest until his opponent surrenders is the winner.
Jukskei

Jukskei is a game with Cape origins and is associated with the Afrikaner gaming tradition where early travellers would try to knock over an upright stick with the jukskei?–?the wooden pin used in an ox’s yoke.
Dibeke

Kho-kho has its origin in the Indian community. It is a tag sport played by teams who try to avoid being touched by the opposing team members. It is made up of two teams of nine members each, with eight players in each. They kneel facing each other, with the ninth being the chaser.
Click here for a photo gallery.

Lintonga is a stick-fighting game made popular by boys herding livestock in the rural areas of South Africa.
Watch 2 videos below.