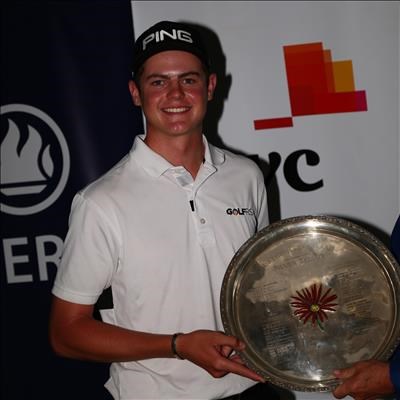 GOLF NEWS - When it comes to winning, no-one in South Africa’s amateur golfing fraternity can hold a candle to Wilco Nienaber this season.

The Bloemfontein golfer won by two points, in spite of a rather average start.

“I scored four points in the Modified Stableford format in the first round and trailed by eight points, but six points in the second round got me within five of Daniel Nduva from Kenya,” Nienaber said.

“I racked up eight birdies in the third round, worth 16 points, to take the lead on 22 points.”

Nienaber headed into the final round with a two point lead over South Africa’s top ranked Jayden Schaper. Nduva was four points off the pace in a tie for third with Ruhan van Dijk from Ekurhuleni and Gauteng North’s James du Preez.

“I made a couple of birdies and I had 24 points through eight holes, with Jayden on 22 points when the hooter sounded,” Nienaber said.

“A huge lightning storm was just about to hit. They suspended play but the organisers announced after 45 minutes that they were reducing the tournament to 54 holes because the storm wouldn’t pass in time for us to finish.”

With a string of victories this season that includes the Sun International Africa Junior Open on the Sunshine Tour Junior Series, a Global Junior Golf Tour double with wins in the Curro SA Juniors International and the RB German Junior Masters, three Nomads Junior titles and the SA High Schools Individual title, Nienaber felt he vindicated himself after a poor performance in the Ekurhuleni Open.

“I think that’s why I played so well in the third round,” he said. “I didn’t start particularly well and I was still trailing by a handful of shots after the second. I was really determined to get into contention and I played the kind of golf I knew I was capable of in the third round.”

The GolfRSA National Squad player enjoyed the format, too.

“It was a nice change from the usual stroke play,” he said.

“You had to get your head around the scoring format, but it was a lot of fun. Par was zero, birdie worth two points and a bogey was minus one. So, if you went par-bogey-birdie, you gained a point. The key was keeping a clean card.”

The Grey College scholar – currently ranked second on the Junior Rankings – hopes to finish the season in the top 10 on the open amateur rankings, but golf will have to take a back seat to school work for the next few weeks.

“I’ll continue to work hard with my coach (Quintin Williams) to stay sharp and I’ll squeeze in the Bobby Locke at Parkview Golf Club in November before exams.

"The Silver Salver carried a lot of ranking points and this win will bring me closer to my goal. Hopefully I can do the same at the Bobby Locke to give my ranking that last big push to get it done.”