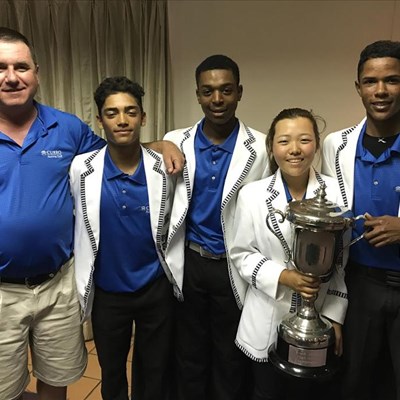 GOLF NEWS - Rustenburg, 4 August 2017 – Curro Aurora had a simple credo for the SA High School Championship: the tournament is never won or lost until the last putt drops.

It was this conviction and a strong team spirit that steered Woo-Ju Son, Kieron van Wyk, Cole Stevens and Carl Mwale into the winner’s circle at Rustenburg Golf Club on a winning score of even-par 432.

Two-time Curro SA Juniors International Girls champion Son guided the team into the early attack with a three-under-par 69 in the first round.

Kieron van Wyk carded a 71 and fellow GolfRSA National Squad player Cole Stevens added a 73 for a three-under-par 213 to lay the foundation for their success.

Under pressure from the charging pack, Son, Van Wyk and Carl Mwale – another member of the GolfRSA National Squad – produced three superb rounds of 73 for a total of 219 that sealed their victory.

However, none the 12 competitors in the leading three teams could match the brilliance of Wilco Nienaber from Grey College Secondary in the Individual Competition. Recent Dimension Data Junior Open U-15 challenge winner Nash de Klerk from the GED Academy signed off with a 72 to grab a share of fifth at even-par 144 with Van Wyk and Stals Swart from the Afrikaans Hoerskool vir Seuns, who closed with a 74.