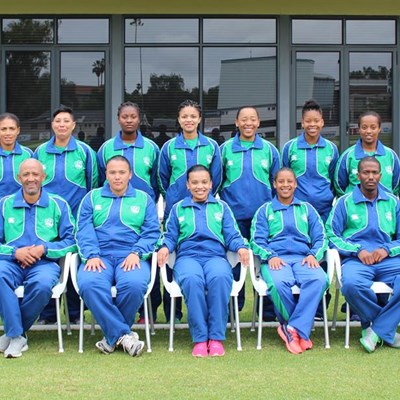 The 2015/2016 SWD women's cricket team. Photo supplied.
SOUTHERN CAPE NEWS - The SWD Women's team got their campaign for the 2015/16 season off to a perfect start when they won both the limited over and Twenty20 matches against Kei in the Cricket South Africa Provincial competition that was played at the REC Ground in Oudtshoorn over the weekend.
On Saturday, the home team posted 149 thanks to a half century by Micaela Andrews (56) and thereafter dismissed Kei for 79 to secure a 70 run victory. Jane Winster picked-up 3/20 with the ball.
Due to rain only five overs per team were possible on Sunday but SWD managed to recorded a vital bonus points victory when they restricted Kei to 18/3 and scored the winning runs from only 2.2 overs.
This weekend the team will travel to Port Elizabeth for a very important fixture against Eastern Province.
The team will be selected from the following players Haroldine Rhodes (captain), Micaela Andrews, Bianca Figeland, Gail Abrahams, Ziyanda Skosana, Hedwig Pienaar, Jenevieve Jantjies, Mbali Ndukwana, Hedwig Pie-naar , Anthea Vallentyn, Bianca Mars, Sanelisiwe Mgqobhozi, Janet Winster and Mochelle May.