Restaurants, casinos and other hospitality services will be able to resume business soon.

NATIONAL NEWS AND VIDEO - President Cyril Ramaphosa has announced the reopening of several sectors of the economy, while bemoaning the violence being unleashed on women and children in recent weeks.

The country is facing two epidemics, according to president Cyril Ramaphosa. One of the coronavirus, and one of gender-based violence and femicide, which has led to several deaths of women at the hands of men.

All sectors will have to adhere to “specific and stringent safety requirements”.

The exact dates for each of the above-mentioned activities and the measures required will be announced in due course. 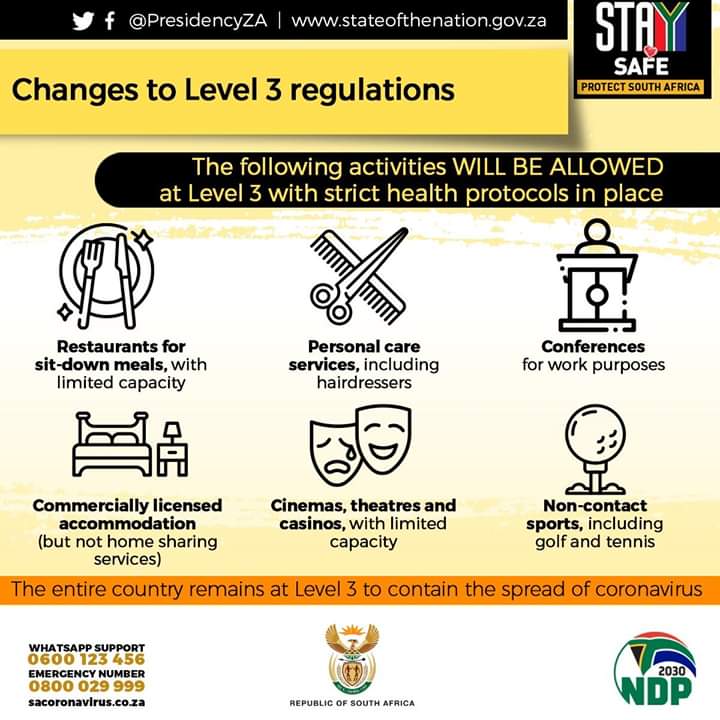 “We have taken this decision with due care and seriousness, appreciating the risks associated with each activity and the measures needed to mamage those risks. Altogether these industries employ well over half a million people and this is the number of people they employed before the lockdown,” he said. “We have had to think about these people who are employed in these industries and those who depend on them for their livelihoods.”

He said it was particularly important to reopen personal care services, such as hairdressers and others in the beauty industry, as these employ mainly women, and given the importance of ensuring women can be financially independent.

He addressed the recent spate of gender-based violence, which has claimed at least 20 women’s lives during the past few weeks.

“At a time when the coronavirus pandemic has left us all feeling vulnerable and uncertain, violence is being unleashed on the women and children of our country with a brutality that defies any comprehension. The women of our country are being raped. They are being killed by men. These rapists and killers walk amongst us. They are in our communities. They are fathers, they are brothers, they are our sons and our friends. They are violent men with utterly no regard for the sanctity of human life.”

He commended the police for arresting the perpetrators, and said he has confidence in the courts sending a clear signal that this violence has no place in society. He urged parliament to ensure recently drafted anti-GBV laws get passed as soon as possible.

Though he did not announce the return of the ban on alcohol, he did say it is necessary to examine the role of alcohol in society, and its influence on the levels of violence and road accidents.

“Several international and domestic studies show clear linkages between alcohol abuse and gender-based violence. Of course, it is not alcohol that rapes or kills a woman or a child. Rather, it is the actions of violent men. But if alcohol intoxication is contributing to these crimes, then it must be addressed with urgency.”

He said the country needs to draw lessons from the lockdown period, and provide greater support for people with drinking problems.

“We need to encourage responsible drinking, especially among young people. We need to be tough on liquor outlets that violate the terms of their licenses and who sell alcohol to those under-age.
But we will also need to look at further, more drastic measures to curb the abuse of alcohol. Ultimately, the success of our fight to end gender-based violence will require the involvement and support of our entire society.

“If we are serious about ending these crimes, we cannot remain silent any longer.”

Government’s response will now focus on dealing with infection hotspots, through the deployment of multidisciplinary intervention teams, increased testing, and screening.

There will however be a shift to more targeted testing, prioritising those in hospitals, healthcare workers, the elderly, and those in hotspots, as the shortage of test kits worldwide worsens.

This includes the use of a single continental market place for African countries, which provides test kits and other critical medical supplies.

In the three weeks prior to the implementation of the national lockdown, infections doubled every two days, but the lockdown bought the country some much needed time, by extending that time to 15 days during level 5, and 12 days at present.

This allowed government to implement several precautionary measures in the country’s health system.

After 100 days, he warned that we are still only at the start of the epidemic, and it may yet be with us for a while to come.

The president says that as the country continues to open, the risk will naturally increase, but emphasised that infection is by no means inevitable”, especially if people continue to adhere to social distancing measures and the wearing of masks in public.

“The President’s address follows a number of meetings of the Cabinet, the National Coronavirus Command Council and the Presidential Coordinating Council,” according to a statement.

He warned that medical experts have advised against the use of devices such as personal fumigation tunnels and sprays, as these could be harmful.