'It's all we have': The plight of SA's informal miners

There are thousands of informal miners in South Africa, according to the National Association of Artisanal Miners (NAAM).

Miners manually hew coal and drag it up to the surface, where it sells for just $35 per tonne.

NATIONAL NEWS - Darkness enveloped a disused mine in South Africa's Mpumalanga province as a pick-up truck left the site's entrance and drove off into the night, loaded with coal.

Informal miner Bonginkosi Mhlanga threw a pickaxe over his shoulder and descended back below ground, where he would remain until daybreak.

Locally known as "zama zamas" - "those who try and try" in the Zulu language - Mhlanga and his counterparts scrape a living by chipping away at abandoned mine shafts previously exploited by mining conglomerates.

There are thousands of informal miners in South Africa, according to the National Association of Artisanal Miners (NAAM).

Many were left jobless when mining companies moved on, struggling to find new work in a country of 59 million people where unemployment stood above 30 percent even before coronavirus hit. 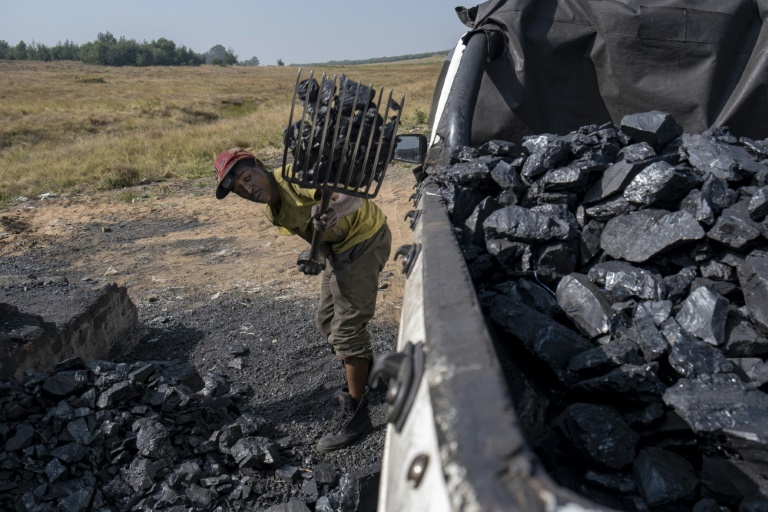 Pickup trucks are used to transport the hand-mined coal away from the shaft.

Mhlanga, 31, skidded down 82 slippery steps bringing him back down into a narrow tunnel just 1.60 metres high.

The air grew thick as he made his descent, walls and floor dripping with humidity.

Bent-over figures brushed past, barely visible in the darkness as they lugged bulging sacks of coal up to the surface.

The ceiling lowered as Mhlanga made his way forward, passing patches of fungus, until he reached a black vein in the rock some two metres wide.

"I take care of it, I keep it clean, and no one is supposed to touch it."

Using a headlamp, Mhlanga lifted his pickaxe and plunged it repeatedly into the rock with all his strength.

Black fragments flew out and fell at his feet. 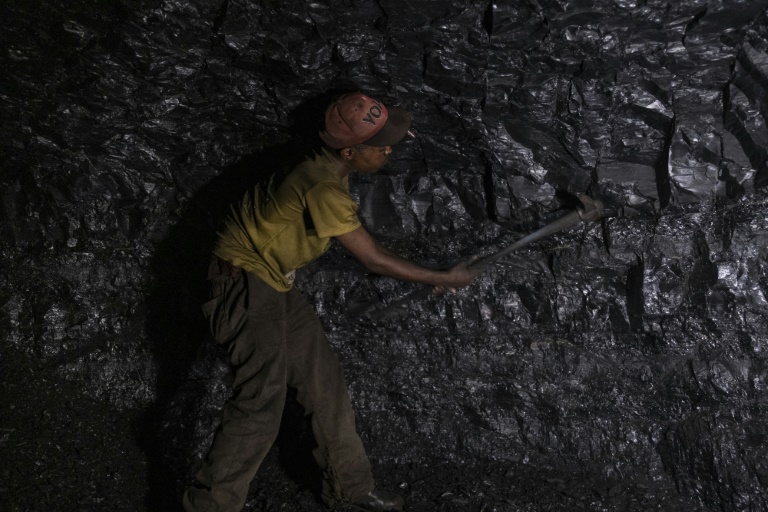 He would later gather the raw coal with his bare hands and stuff it into old polypropylene sacks to sell for a meagre R500 ($35) per tonne.

Mining is an important source of revenue for South Africa, raking in around eight percent of GDP.

"Zama zamas" operate in around 6,000 disused mines across the country, NAAM estimates.

Lack of maintenance and the unmonitored use of explosives can cause ageing tunnels to collapse, burying miners with them.

"When you go down there you never know whether you'll be back," Mhlanga said, reluctant to talk about past incidents.

"If it happens, you have to run and leave everything behind."

Environmental groups and NAAM claim mining causes significant water and air pollution, although official figures are hard to come by. 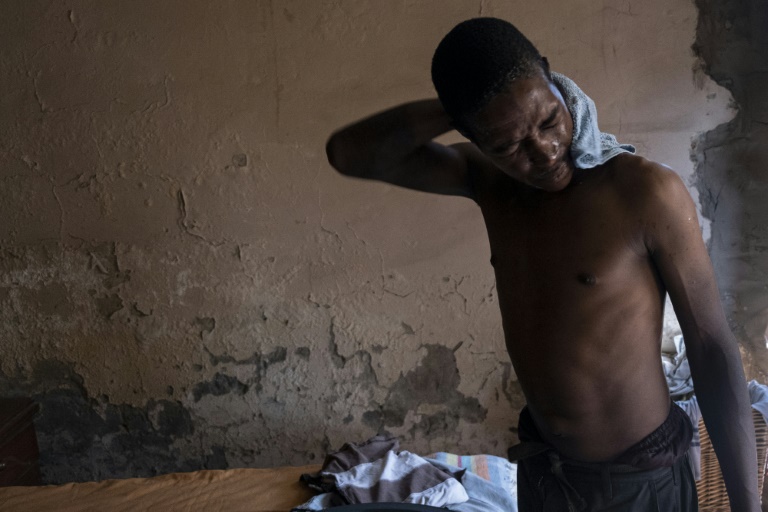 Bonginkosi Mhlanga's night shift in the coal mine lasts 12 hours.

In the former coal mining town of Ermelo, residents continue to dig into disused shafts, degrading their health in order to put food on the table.

They hope the government will grant them legal access to the sites, as with 800 artisanal diamond miners in the central city of Kimberley in 2018 - a move meant to formalise and regulate the activity.

Thick grey smoke hovered over the sprawling townships surrounding Ermelo, seeping out of corrugated iron roofs and filling the late afternoon air with the nauseating smell of combustion.

Almost every household heats and cooks with coal.

"It's all we have around here," said Wesselton township resident Buhle Nkosi. 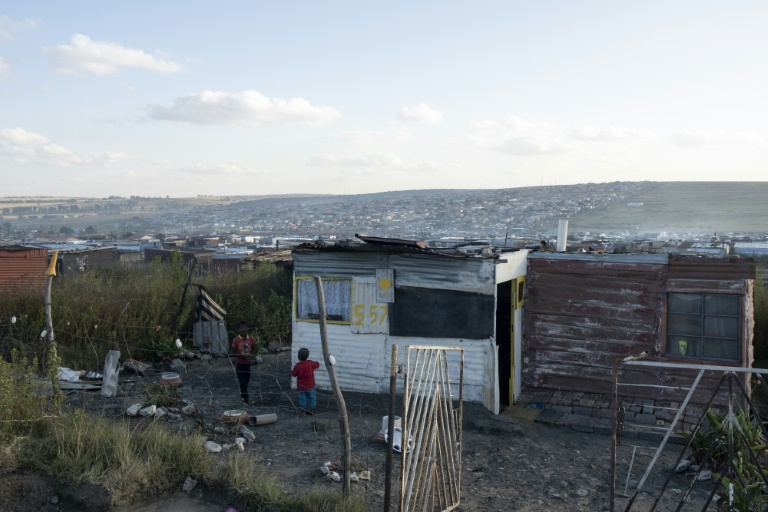 People in the townships live in makeshift shacks where coal is the only source of energy.

Seven months pregnant, Nkosi lives in a makeshift home with no toilet, running water or electricity. Her only source of power is a small coal stove.

More than 80 percent of South Africa's power is generated by coal, which is also exported to China and Europe.

Renewable energy accounts for less than two percent of electricity output in a country ranked the world's 12th-largest greenhouse gas emitter by Bloomberg this year.

The government has vowed to reduce coal-generated electricity production by 59 percent by 2030.

But "such things take time and we are hungry today," Hlatshwayo noted.

Back at the abandoned mine shaft, Mhlanga dragged his last bags of coal back up the 82 steps. 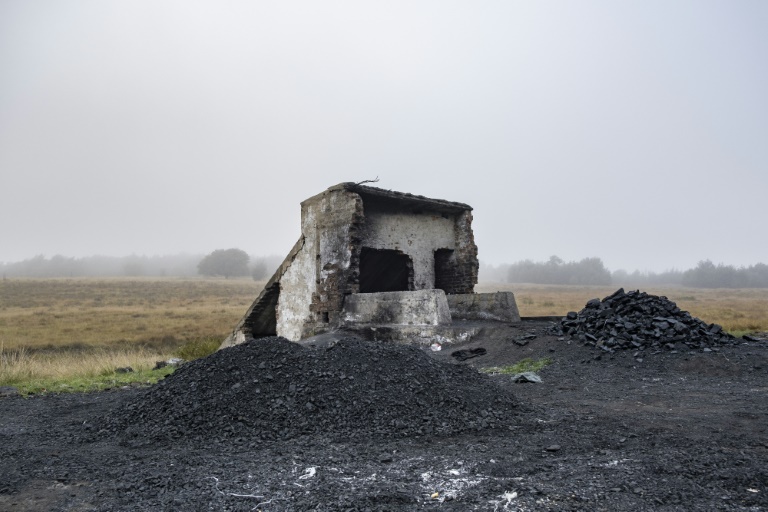 82 slippery steps lead down from the abandoned mine entrance to the coal face.

As dawn broke, informal miner Eddie Malaga arrived for his turn and lit a joint. Like many others, he smokes marijuana before descending into the abyss.

"The pollution doesn't hit us as much as hunger," said the 37-year-old, dragging on his spliff.

"Sorry for the next generation, but we are suffering now."