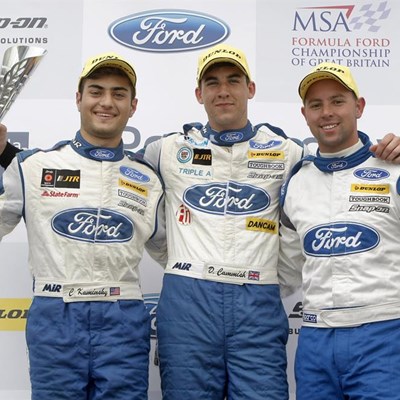 Jayde Kruger on the podium after a second place at Rockingham.
MOTORING NEWS - Multiple South African single seater champion, Jayde Kruger, is making his mark in the Dunlop Formula Ford championship of Great Britain. The 25-year-old Kruger, who won the South African Formula Ford title in 2007 and the Formula Volkswagen championships in 2009, 2011 and 2012 currently drives a Mygale for the British based Jamun team. He now lives in Wilmslow near Manchester and works as an advanced driving instructor.

He joined this season's British Formula Ford title chase, which consists of 30 races, spread over ten events, with the series four meetings old. Although he has missed nine races Kruger currently lies seventh in the championship.

"It is an expensive business and we were extremely lucky to attract the support of InvestChem and long time local single seater supporter Ian Schofield. Ian also gave us advice, which led to Jayde living in Britain instead of flying back and forth."

The series enjoys live television coverage in Britain and this year is contested by drivers from Britain, Norway, China, Argentina, South Africa and America