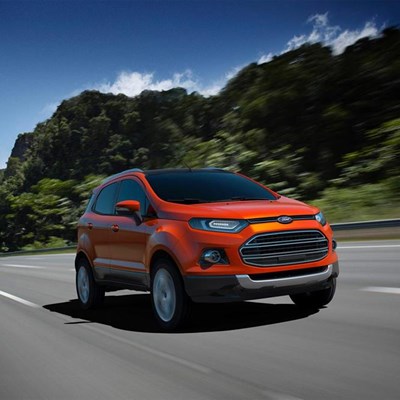 The aim of the model appears to be to offer the commanding driving position of an SUV with the ease of use of a regular car, particularly in developing markets that share similar conditions.

This idea is in itself not new but the Ecosport does at least bring a design, which is aimed at achieving this right from the beginning and at a level of comfort and style associated with developed markets.

The Ecosport is primarily an urban warrior though. Despite having a high 200mm ride height and a wading depth of well over half a metre, it remains a front-wheel drive vehicle and uses relatively modest powertrains in the 1,0-litre Ecoboost turbo petrol, a 1,5 petrol and a 1,5 turbo-diesel.

Based on Ford’s global B-segment platform, the Ford EcoSport is large enough to accommodate five adults and, with a selling price thought to range between R200 000 and R250 000, it will be an aspirational choice. We drove it at its launch in Goa, in India and found a vehicle that promises a lot. The ride was good and Ford have gone to great lengths to make sure the Ecosport is no third-world cheapy.

For example, they use hydraulic rebound stops to dissipate energy when the damper approaches its full extension. Our roads can call for this quite regularly. The technology can reduce the peak force by two to three times compared to traditional mechanical rebound stops. Fit and finish was good, but will have to be even better to stand toe to toe with German-built rivals in SA.

Ford are adamant that the EcoSport will feature the most up to date user friendly technology, much of which is encapsulated in Ford SYNC, the voice activated in-car connectivity system powered by Microsoft. SYNC can recognise up to 150 voice commands and cope with variations in accents and vocabulary, making it easier to access more content by voice. Customers can connect their mobile phone or digital media player via Bluetooth or USB. Drivers can use either steering wheel-mounted controls or voice commands to manage the system’s features.

Using Bluetooth technology, SYNC can wirelessly connect up to 12 different mobile phones through a process called pairing. Once paired, SYNC will automatically transfer all the names and numbers in the phone’s contact list to the in-vehicle system and automatically update phonebook entries whenever the phone is brought back into the vehicle.

SYNC also enables customers to continue their mobile phone conversation as they get into the car without the need to hang up as the system will instantly connect to the Bluetooth-enabled phone once the car is started. The system can also read aloud incoming SMS text messages from compatible phones. Using voice activation, the driver can also safely send a reply from a predetermined list of 15 responses while on the move.

With Smart Keyless Entry, customers no longer need their key to unlock the SUV or to start the engine. They can unlock the doors automatically by pulling the door handle; push the Ford Power Start button and go.

The Ford EcoSport’s cabin also has 20 practical storage spaces, including a glove box that can keep up to six beverage cans cool. The rear seats can be reclined in select models for greater comfort or easily folded down for additional cargo space. With the rear seats tumbled against the front seats, the boot space increases to 705 litres. Ford brings its globally acclaimed EcoBoost technology to India with the 92kW, 170Nm 1,0-litre EcoBoost engine we recently experienced in the new Fiesta.

Typical three-cylinder engines are inherently off-balance and out of sync, causing unpleasant vibrations. The engineers came up with a clever solution and deliberately unbalanced the pulley and flywheel with weights placed precisely to counteract the natural shaking forces of the engine and drive the energy in a less sensitive direction. The engine mounts are also designed to decouple as well as absorb the engine’s shaking forces.

Inside, soft-touch fabrics, tight gaps and the global Ice Blue dashboard illumination all reinforce superior quality and craftsmanship. Controls and knobs are ergonomically placed while seats are designed to be soft enough for comfort and firm enough for longer journeys.The cabin is also extremely quiet at high speeds, thanks to efforts to reduce noise, vibration and harshness.

Add to this a very effective climate control system, something Indian engineers must know an immense amount about given their weather and occupants will be very comfortable in the Ford EcoSport.

The Ford EcoSport offers airbags for the driver and front passenger, as well as side airbags and curtain airbags.

To take the stress out of driving, the Ford EcoSport comes with an array of driver-assist systems. The spare tyre, with an exclusively designed wheel and cover, is mounted on the tailgate as a classic SUV cue, as well as for practical reasons. This results in more available cargo space in the vehicle and makes it easier for customers to lift heavy loads into the vehicle over the lower bumper. Alternatively, if occupants need more cargo space, they can adjust the rear seat back forward, or just fold and tumble the entire seat up for a flat load floor and class-leading cargo area.

With the shingle head restraints, the driver doesn’t even have to remove them before tumbling the seats.And for those who want to carry both passengers and cargo, the rear seat can facilitate that by splitting 60:40 on Trend and Titanium models.