Big pride in my small ride

PRIDE. The deadly sin from which all other sins originate. 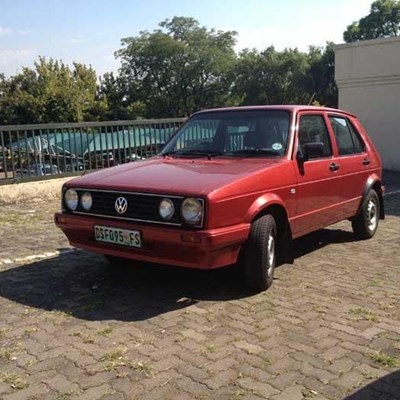 CS Lewis said that it makes you look down at other people and things, an apt description of why society as a whole finds the excessively proud man intolerable. Many people luckily (and thankfully) manage to shake off this supremely unattractive quality. Or so they think.

There is one instance, though, where your sense of pride  will always surface: your car - regardless of what it is.

Think of yourself what you will, but every person needs to feel some kind of external validation and your car provides that, some more often than others.

A guy driving a R900k car can sit every day and look down at other people and their cars, proud in the fact of what he doesn’t have to drive.

Others – especially those who can’t stand their old, scruffy, tech-less, bruised and battered cars – will scoff at the theory that they also find pride in their rides. Most of the time they find themselves head-down in their ancient piece of machinery, sulking because they deserve better from Mom and Dad (if they’re students) or that they’re not at a point in their lives where they can buy a ‘proper’ car.

But, regardless of how depressing you may find your car, a sense of pride will arise at one point or another. Amidst all the complaints and bemoaning of your automotive fate, the one aspect that will get your chest out, is its top speed - what you think or want to believe it is.

This kind of pride is also accompanied by the always feel-good, wonderful bliss that is ignorance.

Certainly, there are exceptions, but almost every human being has an ego big and insecure enough to have to find pride in something. Finding that pride in how fast your car can go is easy, because in these people’s cases, it’s all relative.
I drive a 2005 VW CitiGolf 1.4 (the carburettor version). I love my car. It’s simple and unpretentious. I’ve never climbed in and felt sad that it wasn’t something more modern. Would I say no to a better new car though? Never.

Now, I’m no adrenalin junkie and I also don’t really possess an inner child, so I don’t go to a lot of trouble finding out how uncomfortably fast I can go in a car (I do have to go pretty fast to leave my comfort zone though, depending on the car).

I recently did push my speedometer to just over 160km/h on a brand-new piece road that did not sport a single pothole.
It was terrifying. The car was so unsettled by what I was putting it through, I was sure that if an Uno would by some miracle manage to pass me, I would fall over. My GPS said I was doing only 151km/h. It provided little solace.

I was being needled by a physiotherapist one day when she told me very enthusiastically that she had pushed her Citi – identical to mine in every way save that it was a year older – to 180km/h on the N1. My first reaction was shock and horror: I was being stuck full of needles (very close to my lungs) by a woman who believed with all her heart and soul that her fuel-injection-less Citi could do 180km/h. Most importantly though, she didn’t say it with any hint of surprise; it was with resounding pride.

In another instance, someone told me that he had pushed his 2012 Kia Picanto 1.2 EX (no disrespect to the Picanto; it’s the best value for money on the market) to 190km/h here on the Highveld. A local publication established the top speed of this exact model at 163km/h (at sea level).

Let’s say that the speedometer reading at the true speed of 163km/h actually was 190km/h. That would mean that Kia had built a car with a speedometer deviation of 16.56%. So either this was the dud of all duds – I cannot for a second believe that Kia would roll out a car as defective as this – or our old friends Dr Pride and Mr Vanity have crashed the party.
Now I can’t be so reckless as to accuse these people of lying, but I find the ignorance of these instances astounding and more to the point, ridiculous.

My lack of tact often sees me refute these people’s claims to their faces. All I get are looks of confusion and hurt, because I had the audacity to challenge the validity of – you guessed it – the one thing they managed to find pride in.
We seemingly need to commit the ultimate deadly sin in order to feel valid and worthy and no matter how much your ride might actually make you feel unworthy, you somehow always will find pride in your small ride.