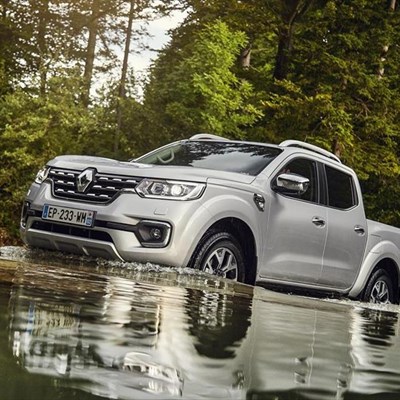 Alaska is the Aleut word for "big country" and the Aleut people are closely related to Eskimos.

This is Renault's first global one-ton bakkie, the company said, developed in France, Latin America and Japan for the world market.

It is rather closely based on alliance partner Nissan's new Navara bakkie.

Its basic design is quite conventional, a box-section ladder chassis with a proven twin-turbo 2,3-litre dCi diesel four in 118kW or 140kW format and a six-speed manual gearbox driving the rear wheels.

It is aiming at the market currently occupied by one-tonners like Amarok, Hilux and Ranger.

Renault has kept the overhangs short and the ground clearance high at 230mm, for decent off-road ability.

It has used the innate versatility of the separate chassis format to create single cab, double cab and chassis cab versions, with long or short beds and even a wide-body option, depending on the market demand. Even its name, Alaska, conjures up visions of adventurous people driving rugged vehicles over wild terrain.

Upscale double-cab models will have a seven-speed automatic transmission and five-link independent rear suspension, similar to the new Navara, rather than a live axle and leaf springs.

This will add to improved ride comfort, opening the door for a fully-fledged SUV version later on, to compete with Toyota's Fortuner.

In some markets where diesel is not a strong seller, it will also be offered with a 118kW, 2,5-litre naturally-aspirated petrol engine.

In countries where diesel quality is suspect, the 2,3-litre twin-turbo dCi will be replaced by a less sophisticated and more forgiving 2,5-litre turbo diesel, also in 118kW and 140kW variants. All-wheel drive will be available on most mid and upscale variants, with electronic limited-slip differentials as standard at both ends.

This is really a form of traction control, using the ABS sensors to brake whichever wheels are threatening to spin, rather than locking the differentials.

However, an old-school locking rear differential will be available for derivatives with serious off-road intentions, along with hill descent control (HDC).

Renault SA says there is "no confirmation" as yet as to when the Alaska will be released on the South African market, but a spokesperson said it is likely to be during 2017.