Police in the Germany town of Volkmarsen said it was too soon to say whether it was a deliberate act.

INTERNATIONAL NEWS - Several dozen people, including children were injured Monday when a car drove into a carnival procession in central Germany, police said, adding that the driver had been arrested.

A spokeswoman for police in the small town of Volkmarsen where the incident took place told AFP "it is too soon" to say whether the driver ploughed into the crowd on purpose.

"There are dozens of injured, including some who are gravely hurt," the spokeswoman said.

Speaking to DPA news agency, a police spokesman added that children were among the injured in the incident in the state of Hesse.

Germany is on high alert following a shooting spree by a far-right gunman in the city of Hanau, also in Hesse, last Wednesday, that left 10 people dead.

Monday's incident took place as residents in many parts of the country celebrate Rose Monday, a highlight of annual carnival festivities that sees adults and children alike dress up and attend parades where people play music and throw candies from floats.

Police in Hesse announced on Twitter that all carnival parades across the state had been cancelled as a precaution.

'Full speed'
Pictures from the scene in Volkmarsen showed police officers and rescue vehicles next to a silver Mercedes hatchback, having apparently come to a halt outside a REWE supermarket.

A pile of debris is seen on the road next to the car, including a broken wooden cart, a knocked-over traffic cone and bottles of sparkling wine.

Several dozen people are seen milling around on the sidewalk, many in colourful costumes. 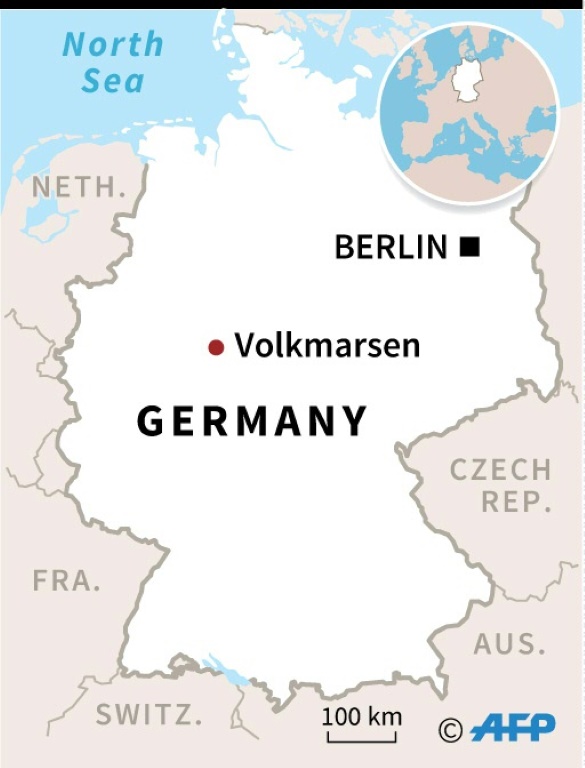 Map of Germany locating the city of Volksmarsen, where a car drove into a carnival procession, injuring several people.

According to witness reports in local media, the incident in the town of some 7,000 people started at around 1330 GMT.

"Eyewitnesses say the driver bypassed a street closure and raced into the crowd at full speed," the Frankfurter Rundschau newspaper wrote.

Rampage
In last week's attack in Hanau, the gunman - who left behind a racist manifesto - first opened fire at a shisha bar and a cafe, killing nine people, before shooting dead his mother and himself.

The rampage fuelled concerns over Germany's increasingly emboldened far right scene, after a pro-migrant politician was murdered in June and an anti-Semitic attack on a synagogue left two dead in the city of Halle last October.

Condemning the violence in Hanau, Chancellor Angela Merkel said Germany had to fight back against the "poison" of racism and hatred running through German society.

Thousands of Germans joined vigils to mourn the victims and call for more protection for minorities.

Many also used the occasion to vent their anger at the far-right AfD party, which has been accused of stoking anti-foreigner sentiment and normalising hate speech in recent years.

The attacker, a failed Tunisian asylum seeker, had pledged allegiance to the Islamic State (IS) group.

In response to the shootings in Hanau, Interior Minister Horst Seehofer on Friday again vowed to ramp up security and put more police at mosques, train stations, airports and borders.