Science without gravity at the International Space Station

The ISS, which orbits about 250 miles above Earth, is as large as a football field inside and divided up like a beehive into spaces where the crew can carry out experiments with guidance from researchers on the ground.

More than 3,000 such scientific tests have been carried out at the ISS since manned missions began in 2000.

INTERNATIONAL NEWS - In two decades orbiting the Earth the International Space Station has become a cutting-edge cosmic laboratory, with astronauts researching everything from black holes to disease and even gardening in microgravity.

The ISS, which orbits about 250 miles above Earth, is as large as a football field inside and divided up like a beehive into spaces where the crew can carry out experiments with guidance from researchers on the ground.

Often, the astronauts are also the guinea pigs.

More than 3,000 scientific tests have been carried out at the ISS since its manned missions began in 2000.

"From a science perspective, there have been some major discoveries," said Robert Pearlman, space historian and co-author of "Space Stations: The Art, Science, and Reality of Working in Space".

The latest mission - named "Alpha" after Alpha Centauri, the closest star system to our own - will be no exception. 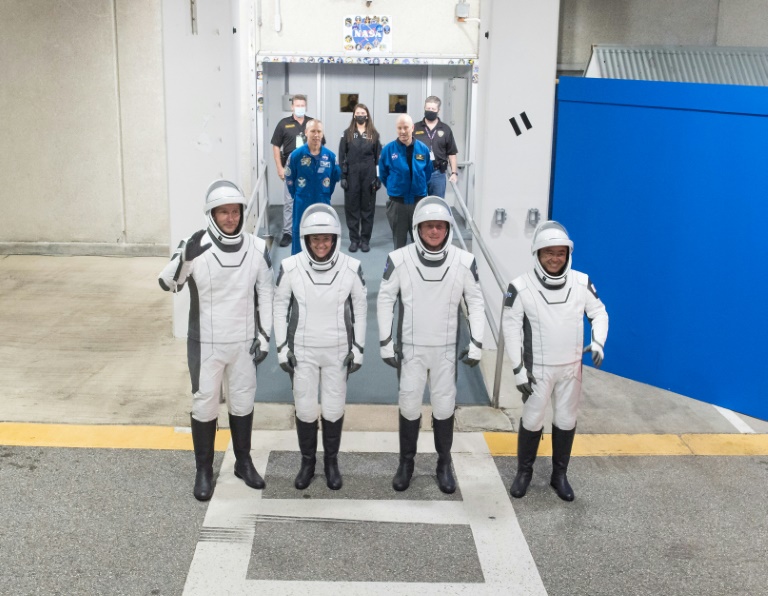 On Thursday, US astronauts Shane Kimbrough and Megan McArthur, the Japan Aerospace Exploration Agency's Akihiko Hoshide and the European Space Agency's Thomas Pesquet will blast off for the ISS aboard the SpaceX mission Crew-2.

They are likely to be busy.

Alongside work to maintain the space station itself, around a hundred experiments are in the diary for their six-month mission.

These include an acoustic technique using ultrasonic waves to move and manipulate objects or liquids without touching them. 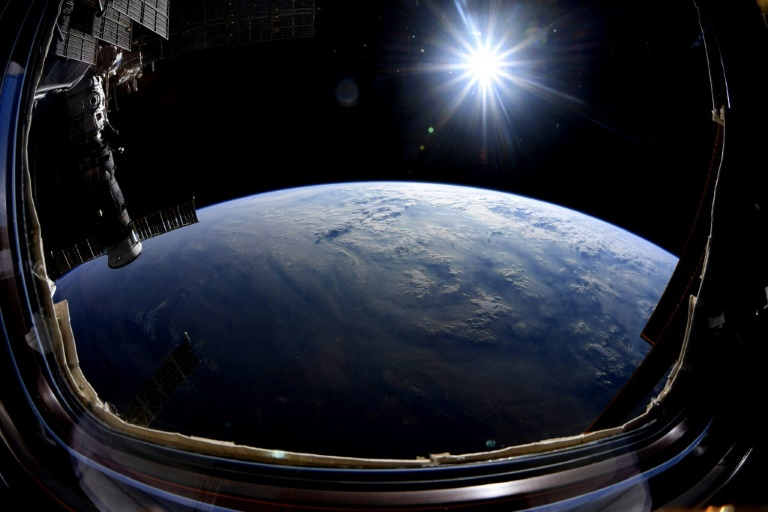 The ISS offers new perspectives on Earth as well as Space.

Scientists hope this research can eventually help space agencies prepare for distant space missions which will expose crews to the rigours of space for long periods of time, and even help fight brain disease on Earth.

"It really sounds like science fiction to me," joked Pesquet, an aerospace engineer.

There is ongoing research into what are known as "tissue chips" - small models of human organs that are made up of different types of cells and used to study things like ageing in the immune system, kidney function and muscle loss.

"We don't fully understand why, but in microgravity, cell-to-cell communication works differently than it does in a cell culture flask on Earth," said Liz Warren, senior program director at the ISS US National Laboratory, adding cells also gather together differently.

"These features allow cells to behave more like they do when inside the body. Thus, microgravity appears to provide a unique opportunity for tissue engineering."

Another important element of the mission is upgrading the station's solar power system by installing new compact panels that roll open like a huge yoga mat.

Crew-2's launch day coincides with Earth Day, and by the time the crew returns they will have also contributed to environmental research by taking 1.5 million images of phenomena like artificial lighting at night, algal blooms, and the breakup of Antarctic ice shelves.

The experiments are designed for the long term, beyond individual missions, said Sebastien Barde of France's Cadmos, which organises microgravity science experiments in space. 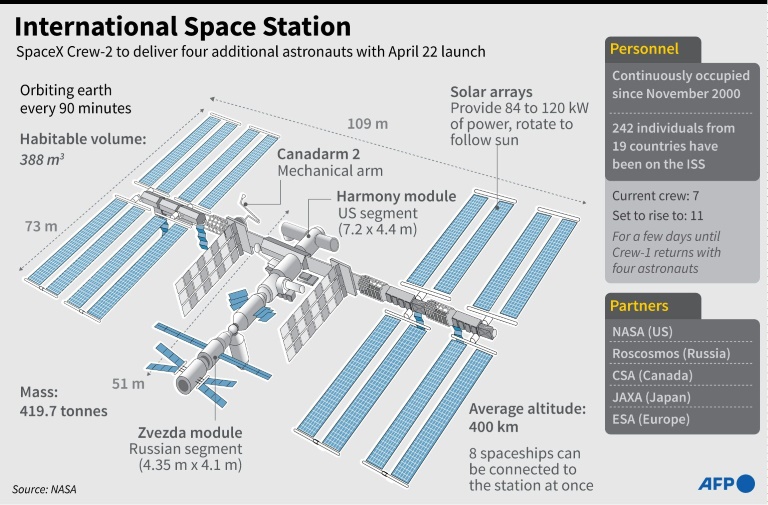 The study of weightlessness - or microgravity - has gone from "pioneering to something standardised", with increasingly precise methods of measurement, Barde said.

"Twenty years ago, there was no ultrasound machine on board," he added.

Claudie Haignere, the first French woman to fly in space, visited the ISS in 2001 and remembers it as rather "poorly equipped".

Now she says she it boasts "exceptional laboratories".

The astronauts also stay longer - six months, versus a fortnight for the first manned flights - giving researchers more time to measure the effects of microgravity on them.

It weakens muscle and bone and affects the heart and blood vessels. Some of the effects resemble a speeded-up progression of ageing and diseases on Earth.

Whilst being guinea pigs for this research, the ISS crew has also collected data on black holes, pulsars and cosmic particles to help expand our understanding of the Universe.

With the ability to grow supplemental food seen as an important step to helping humans venture deeper into Space, they have even done some experimental gardening.

In 2015, astronauts sampled their first space-grown salad and they have since tried growing radishes.

Pearlman said the discoveries range from those related to human health - like a treatment for salmonella - to experimental engineering.

"One very promising technology right now that's just on the cusp of happening is 3D printing body parts," he said.

Some have raised concerns about the cost of the ISS, while NASA itself is seeking to disengage as its attention shifts to deeper space.

But Barde said the space station, scheduled to retire in 2028, is the only platform for some scientists to pursue their research, whether that is in medicine or material sciences that need an environment without gravity.

He dismissed the idea that we have learned everything we need to know: "It's like wondering if you really need to enlarge a telescope, because you have seen 'enough' stars!"