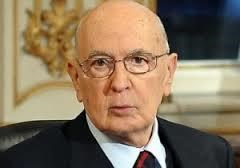 The 89-year-old Napolitano, who has been the head of state since 2006, chaired the lower house of parliament, the Chamber of Deputies, from 1992 to 1994, when the alleged talks between Mafia bosses and state officials would have taken place.

He is not a suspect in the trial, but was expected to be interrogated about his former legal affairs advisor, Loris D'Ambrosio, who wrote him a letter shortly before dying of a heart attack in 2012.

In the text, D'Ambrosio rejected accusations that he tried to interfere with investigations into the alleged state-Mafia pact in a bid to protect former Interior Minister Nicola Mancino, who is now one of the defendants in the trial.

Napolitano's aide also cryptically suggested that, in the early 1990s, when he was a high-ranking official at the Justice Ministry, he may have been manipulated to cover up "unspeakable agreements."

Napolitano has already told the court in writing that he does not know what D'Ambrosio was referring to. The president was going to be questioned at a closed-door hearing, held especially at the Quirinale presidential palace in Rome.

The state-Mafia pact trial is normally conducted in Palermo, Sicily.

Prosecutors suspect that, in an attempt to stop a Mafia killing campaign which started in 1992, authorities eased prison terms for more than 300 jailed mafiosi and allowed Bernardo Provenzano, a Sicilian Mafia boss, to remain a fugitive for years.