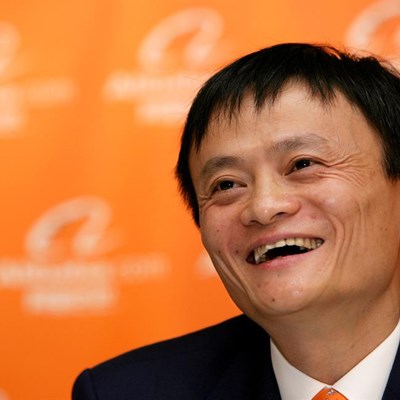 Ma, whose Alibaba controls 80 percent of e-commerce in China, was speaking to a business audience on his first visit to India, two months after his record initial-public-share offering raised $25 billion.

"We will invest more in India, work with Indian entrepreneurs and technology companies," the billionaire promised in New Delhi, without naming any figures.

He said his Hangzhou-based Alibaba already has on its site a large number of small Indian businesses selling goods - from spices and chocolates to tea - to more than 400,000 Chinese customers.

He forecast more Indian goods would be sold on his Chinese site as his exchanges with India picked up.

The 50-year-old executive chairman of Alibaba said there was huge scope for "mutual engagement" in technology between India and China and that it could "change (the) lives" of many small businesses.

"I was a teacher earlier and the Internet changed my life. Right now is a wonderful time for businesses in India and China to work together," he said.

Ma's entourage was keeping a tight lip on the businessman's itinerary.

The executive "will be participating in a number of meetings with local businesses," said a spokeswoman, declining to disclose more.

Ma, China's richest individual with a net worth of nearly $30 billion, was set to meet several Indian entrepreneurs.

Alibaba already has a small presence in the Indian market with a business-to-business start-up launched in 2010, but analysts expect it to expand in India's e-commerce market, possibly through online marketplace Snapdeal.

It pumped $627 million into Snapdeal, which styles itself as the "Indian version" of Alibaba, and has grown explosively in the country's fast-expanding e-commerce market.

Local reports said Ma was expected to meet Kunal Bahl, the 30-year-old co-founder of Snapdeal and its chief executive. But Snapdeal declined to confirm any meeting.

Speculation has been mounting that Ma might join hands with the Indian company to build a bigger e-commerce presence in India.

Ma's whirlwind 48-hour-trip comes in the wake of other visits by top e-commerce figures such as Jeff Bezos, founder and chief executive of Amazon.

Amazon, which has a marketplace model in India, and Alibaba, which sources from India, are locked in fierce competition globally.