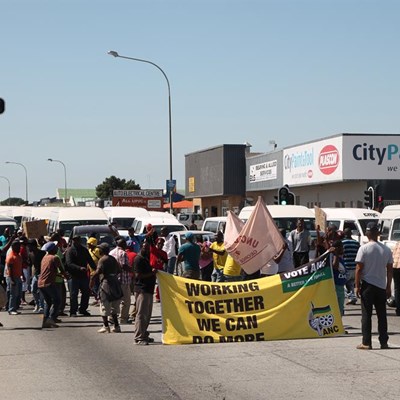 The protesters approaching the railway bridge on Nelson Mandela Boulevard. Photos: Myron Rabinowitz
GEORGE NEWS - The fourth anti-GO GEORGE protest march by disgruntled taxi owners and drivers, known as the George Taxi Industry, took place yesterday. Although peaceful, the disruption in the centre of town was chaotic at times as the end of the march coincided with the end of the school day shortly before 14:00.
Traffic in the CBD came to a standstill as parents who were on their way to pick up children, felt the brunt of the slow moving taxi convoy. The GO GEORGE bus service was suspended until 14:00 as the authorities are still very nervous when it comes to anti-GO GEORGE protests in light of the violent protests that saw four of the public transport buses go up in flames on 19 August last year.
Starting shortly before 10:00 at the Thembalethu Taxi Rank, taxi owners showed their support in big numbers with roughly 60 taxis joining the protest.
The number of taxis swelled to more than 100 as the march progressed down Nelson Mandela Boulevard into York Street to the George Municipality where a memorandum was handed to George Mayor Charles Standers by Cornelius Esau, spokesperson for the disgruntled taxi fraternity.
Langa Kholisile Langa, chairman of the ANC George sub-region, delivered a politically charged speech, referring to the "misdemeanours" of the mayor and fellow DA councillors.
Esau cautioned the mayor and the MEC of Transport Donald Grant that these protests will not stop until their demands have been met. Reading from the memorandum, Esau demanded that their taxi permits be renewed in the areas where the GO GEORGE bus service operates.
He continued by accusing the Provincial Government of high handed tactics, and gave an example of operators whose permits have been cancelled, refused renewal, and new applications for permits rejected because of their involvement in opposing the implementation of the GO GEORGE public bus service.
The mayor was asked to respond to the memorandum in seven days. The protest then proceeded to the Provincial Transport Department in Courtenay Street, where a memorandum was given to Kurt Hendricks, an official of the department. At about 14:00 the march ended and protesters left the CBD in taxis.
An elderly lady that the George Herald encountered on the Nelson Mandela Boulevard bridge over the railway said the taxi protesters had forced her and co-passengers from a bakkie that was giving them a lift telling them to walk, saying "nobody was allowed to take a taxi".
Some residents exiting Thembalethu were visibly upset as they had to walk to work because no taxis were available.
Click here for a photo gallery.
Cornelius Esau (left), spokesperson for the disgruntled taxi industry, hands over their memorandum to George Mayor Charles Standers.
Toyi-toying in York Street on their way to hand over the memorandum to the mayor.
Click here for previous articles:
• Taxi protest update
• Latest update: Anti-GO GEORGE protest
• Protesters arrive at George Municipality
• Protest moving up York Street
• Protest moves down Nelson Mandela Boulevard
• Update: Anti-GO GEORGE protest
• Anti-GO GEORGE protest underway
• No GO GEORGE buses tomorrow morning
ARTICLE: MICHELLE PIENAAR AND MYRON RABIONWITZ, GEORGE HERALD JOURNALISTS.
'We bring you the latest George, Garden Route news'