Remembering those who gave their lives in war

The poppy's origin as a popular symbol of remembrance lies in the landscapes of the First World War.

SOUTHERN CAPE NEWS - In the approach to the annual observance of Remembrance Day on Wednesday 11 November, the Moth (Memorable Order of Tin Hats) in George will be holding their poppy appeal collection in George on Saturday 7 November.

The funds go towards welfare work among military veterans and each year the nation expresses its unequivocal support for the Moth's work through generous support of the Poppy Appeal.

It is one of the best known and supported campaigns on the Moth calendar along with the wreaths laid at Rememberance Day parades. The poppy has become a symbol of reflection and hope.

Rag Bill Pieter Viljoen from the local Outeniqua Shellhole of the Moth shares some background and history with our readers:

Origin of the Memorable Order of Tin Hats
The Moth is an ex-servicemen's organisation founded in Durban, South Africa in May 1927 by a remarkable man Charles Alfred Evended. In 1927 he saw a war film that included an impressive scene of marching troops wearing tin hats, and muddy uniforms all carrying trench equipment.

Looking at the scene, it made him wonder what had become of his comrades in the army; where they were and what they were doing. This line of thought inspired a cartoon on forgetfulness of comradeship that had apparently ceased to exist.

From this one idea other ideas came to the fore, then discussions with colleagues and friends and, eventually, the founding on 7 May 1927 of the Moth.

The Order is based on concord and harmony and operates independently of race, religion or politics in the same way as front-line service, but with full democracy.

The Moth emblem
The centre of the order is the tin hat, hallowed by the Light of Service. To complete the emblem it includes the crossed rifles of sacrifice, surrounded by 12 stars that signify mutual help, the whole within an unending circle, expressing life and harmony without end. 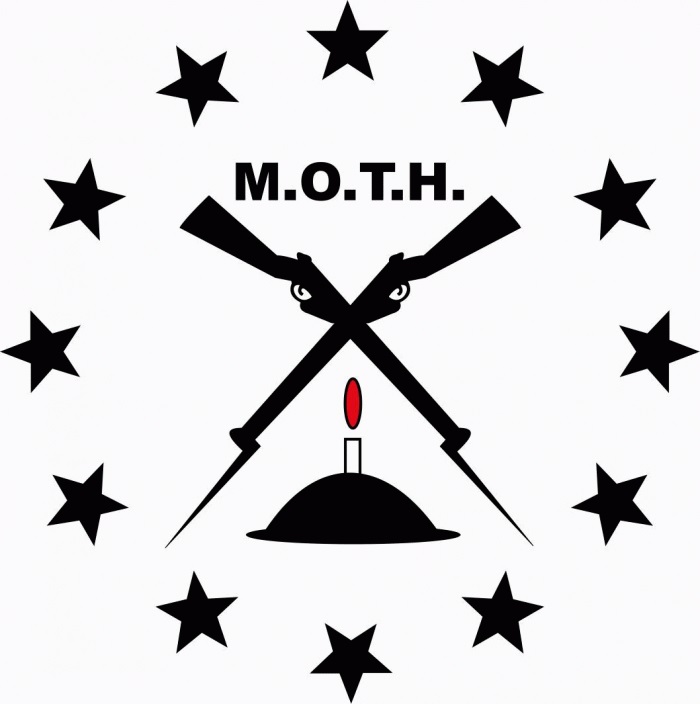 The logo of the Memorable Order of the Tin Hat.

The name of the Shellhole was inspired by the beautiful mountain ranges along the Garden Route, the Outeniqua Mountains.

Taken from Sydney Opperman's articles : "The Outeniqua Mountains near George were named after the ancient indigenious people, the Outeniqua. The name Outeniqua consists of three component words : Ou-teni-qua that describe them as 'people living in harmony with honey bees'. The bee would be the symbol of these people, not only here, but also in the ancient civilisations of India and Egypt. It carries the symbolism not only of 'Mother Earth and her energy', but also of 'divine intelligence'.

Another bearing/translation: Outeniqua is said to be derived from the Outeniqua tribe that once lived in this area and it means, 'They who bear honey (Honey Bearers)'. Hence the bee in the Shellhole badge.

This shellhole developed over the past 71 years and its successes have been achieved through hard work and commitment by all the members.

There are two categories of membership: Moths and the Friends of the Moths (FOTM). They are people of all ages and who are actively in support of the three Moth ideals: True comradeship, mutual help, and sound memory.