'Poor workmanship must be addressed' 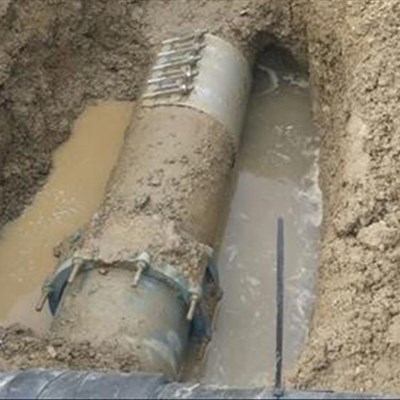 Water leaking from the Post Office's pipes flooded the area underneath, where the main water pipeline runs.

This is the sentiment of Kobus Kearney, owner of JFK Motors on the corner of Merriman Street and Nelson Mandela Boulevard.

"As a result of bad workmanship the municipality had to return twice after work was done in front of my business. This is a waste of taxpayers' money and extremely inconvenient as the road was closed for days," he says.

The Kearneys, who stay in the house behind their business, were woken on the morning of Tuesday 17 October to the sound of a municipal team digging up the road to fix a burst pipe.

Kearney, who had encountered similar situations in the 30 years he worked for the post office, explained how this situation developed.

"Man holes tend to fill up with storm water when it rains. When repairing the main waterline on 17 October, the workers ruptured the Post Office pipes, allowing storm water from subsequent rain to seep into these pipes.

"This water leaked out over the next few days, causing the area to remain wet. A municipal repair team opened up the water pipeline three times before it was eventually effectively fixed.

"I warned them that they had damaged the Post Office pipes that run down Nelson Mandela Boulevard and cross the water line running outside my business.

"Nevertheless, they completed the repair to the main water pipe that day and closed the hole, not fixing the ruptured Post Office pipes," says Kearney.

On Monday 30 October municipal workers arrived to redo the damaged pavement, so that the road could be re-tarred.

"The team realised there was a problem as the area had not dried out. On Wednesday 1 November the municipality sent in a contractor to open the area to determine what the problem was.

They did the original repairs to the main waterline from scratch, closing up the hole that afternoon.

On Friday 3 November they returned to reopen the hole for the third time as the previous evening there had been a heavy cloudburst and the area was wet again.

This time they repaired all the pipes, including those of the post office. I think the problem has finally been solved," Kearney says. George Municipal spokesperson Chantel Edwards-Klose confirmed the pipe bursts. "The burst was repaired by a municipal maintenance team and a Telkom sleeve that crosses the mains was damaged in the process.

"The reinstatement of the site was done by a contractor.

"Water from the burst flooded the Telkom sleeve and when the backfilling was done, the sleeve was not drained beforehand. When the backfilled material became wet, it was suspected that a leak had occurred and the excavation was re-opened.

"The Telkom sleeve was drained and the excavation backfilled again. After the rain the material became wet again, from storm water that flooded the sleeve.

"The excavation had to be re-opened and the sleeve was repaired. The repair work was then completed."