Pilot honoured for building and flying own aircraft 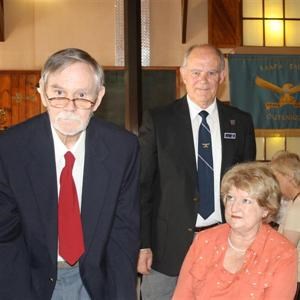 Georgian Theo Oosthuizen (left) was honoured for building "Stockmaster", his own aircraft which he used to find missing cattle. He is seen here with the chairman of the SA Airforce Association, Peter Searl, and Annatjie, Theo's wife.
GEORGE NEWS - Theo Oosthuizen, a member of the SA Airforce Association, was honoured for fulfilling his dream of building and flying his own aircraft.

He was handed a certificate by the newly elected chairman, Peter Searl, during Friday’s annual general meeting held at Pine Lodge. Oosthuizen was praised for his perseverance in building the aircraft from scratch, and for flying it with success for many years in the Meiringspoort area where he farmed.

The association provides comradeship to former airforce members (many who have served on the border, amongst others) and gives support in hard times, especially to airmen who have become frail and sickly. Female members are made to feel equally welcome at luncheons and other social events - no exclusive male domains here.

A golf day will be held on 1 April this year (no joke) at Simola Golf Resort near Knysna, to raise funds.

The new committee was elected with Ola Grinaker being chosen as vice-chairman. Grinaker was one of the founding members of the Outeniqua branch of the SA Airforce Association.

As is to be expected with men who have seen combat action, there was a lot of sharing of anecdotes of daring emergency landings and other exploits during the lunch which was greatly enjoyed by all. It has been understood that Oosthuizen survived several emergency landings, one of which was on a road near his farm (but more about that in a later edition).